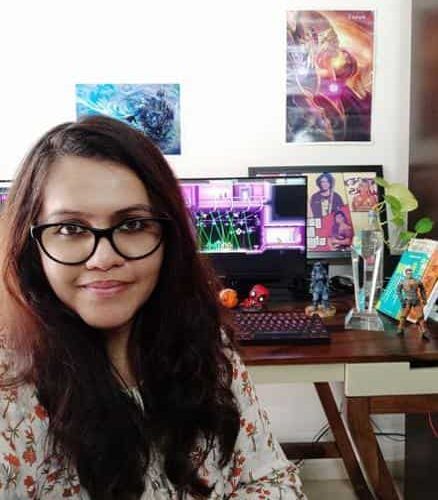 A woman from Palakkad, Kerala, has become the first Asian inducted into the Global Women in Games Hall of Fame. Poornima Seetharaman, 36, was added to a list of just 24 women designers, entrepreneurs and researchers picked since the initiative was launched by the Women in Games not-for-profit organisation in 2011, to shatter gender stereotypes in the worlds of gaming and game design.

Now based in Bengaluru, Seetharaman is also lead designer on FarmVille 2: Country Escape. Born to a bank manager and a teacher, she studied software engineering in Navi Mumbai.

“I have had to constantly break the glass ceiling as I fight for better career opportunities and equal pay, but I have also got opportunities because of my gender. A woman in gaming is looked at as a rare specimen, and that brings in some good attention and opportunities also,” Seetharaman says.

It helps to have friends and colleagues who help you stay confident, she adds, and it helps if you refuse to give up.

In that sense, Seetharaman adds, her idol is Leslie Knope, the indefatigable, ever-hopeful government worker from the American TV series Parks & Recreation. “Leslie doesn’t give up and continues to fight in the predominantly male arena of politics. She has her lovely support system of people who stand by her and look up to her. In that sense she is a true leader and with true leaders comes change,” Seetharaman says.

Seetharaman came relatively late to gaming. It wasn’t until she got her own computer, at 16, that it became a prominent part of her life. “I entered the gaming industry by chance. A friend told me of a vacancy that just happened to be in a game development firm.”

That was 15 years ago. She has since worked with Indiagames (now part of Disney India), JumpStart (NetDragon), GSN Games and now Zynga, the creators of Farmville.

Seetharaman also teaches at the National Institute of Design, Bengaluru, and took a break from running a game design and development consultancy called Pinaka and a game development studio called NammaLore Entertainment, to join Zynga in April.

“Poornima has been a fantastic addition to the Zynga design team. Her team looks up to her not only for her expertise in game design but also for her willingness to get in the weeds and solve complex problems for the games, while remaining player-first in her thinking,” says general manager for Farvmille 2 Akshay Bharadwaj.

Her dream project, Seetharaman adds, would be dedicated to her late paternal aunt, Guru TR Balamani. “She devoted her life to teaching Carnatic music and has been an inspiration for musicians like Shankar Mahadevan and Bombay Jayshri. I would visit her on Sundays as a child and listen to her. She passed away six years ago and I have been planning a tribute in the form of a game called Madhuram (Sweetness in Tamil and Malayalam), an infusion of Carnatic music with gaming that will take the player on a journey through the Navarasa or nine emotions.”

Her message to others with their heads in the world of pixels: “It’s not going to be easy. Results matter, not your gender. Today, we have enough resources online and people in game development one can reach out to. Hone your skills, participate in game jams, and sign up for an internship. Do not give up.”

11/20/2020 Lifestyle Comments Off on Game on: Meet the woman game developer now in a global Hall of Fame
TV & Movies