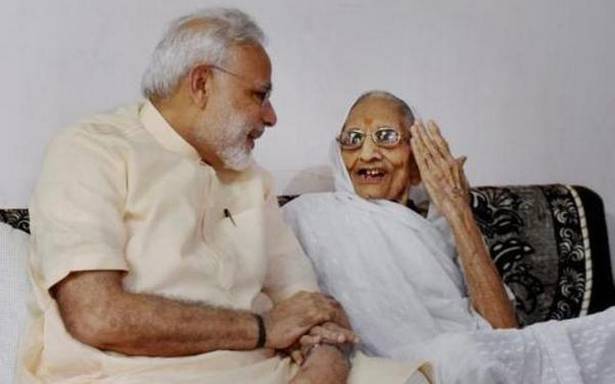 Prime Minister Narendra Modi will be in Gujarat on Sunday evening to seek the blessings of his mother after his BJP-led NDA returned to power with a massive majority in the Lok Sabha elections.

On Monday, he will be in Varanasi, the LS seat he retained in the elections by a margin of 4.79 lakh votes.

“Will be going to Gujarat tomorrow evening, to seek blessings of my Mother. Day after tomorrow morning, I will be in Kashi to thank the people of this great land for reposing their faith in me,” the Prime Minister tweeted.

The Lok Sabha and Odisha Assembly elections were held simultaneously, but in many constituencies people have voted in favour of one party in the Parliamentary poll and for another in the state election.

In the prestigious Bhubaneswar Lok Sabha seat, former IAS officer Aparajita Sarangi, who contested as a BJP candidate, got the benefit of split votes.

She was elected to Lok Sabha by defeating her BJD rival and former Mumbai Police Commissioner Arup Patnaik by 23,939 votes though none of the saffron party candidates won in any of the seven Assembly seats under the Bhubaneswar Lok Sabha constituency.

Sarangi recieved 4,86,991 votes (48.45 per cent) while all the seven BJP assembly candidates under the Bhubaneswar Lok Sabha seat together polled only 2,90,607 votes.

There has been a difference of 19.15 per cent vote between a Lok Sabha candidate and Assembly nominees polled.

Similarly, in Koraput Lok Sabha seat, Congress candidate Saptagiri Ullaka was elected though most of the Assembly segments under its jurisdiction went in favour of ruling BJD.

There are seven assembly segments like Gubupour(BJD), Bissam Cuttack (BJD), Laxmipur (BJD), Koraput (BJD), Pottangi (BJD), Rayagada (Indpt) and Jeypore (Congress). Of the seven segments, Congress won in one seat even as Ullaka got 3,71,129 votes against his BJD rival Kausalya Hikka’s 3,67,516 votes.

Similar was the situation in Balasore, Baragarh, Bolangir, Kalahandi, Sambalpur and Sundergarh Lok Sabha constituencies. However, in case of Mayurbhanj, the situation was different as the BJP candidates have also won in certain assembly segments.

Is O. Panneerselvam lobbying for a berth for his son?

The AIADMK-led front may have managed to win just one Lok Sabha seat in the State, but that did little to douse speculation in political circles on Friday whether Deputy Chief Minister O. Panneerselvam’s son, P. Raveendranath Kumar, the victorious candidate from Theni, would be included in the Union Council of Ministers.

Sources in the BJP said that the Deputy Chief Minister had been lobbying with the national party for his son’s inclusion in the Ministry. Considering the fact that Mr. Raveendranath Kumar is a first-time MP, he may, in the event of making it to the Ministry, only get a Minister of State or Deputy Minister berth.

A day after Prime Minister Narendra Modi was re-elected with a thumping majority, the process of putting in place the new government began, with Ministers of the Union Cabinet meeting and passing a resolution to dissolve the 16th Lok Sabha and tendering their resignations.

A Rashtrapati Bhavan communique confirmed that Mr. Modi called on President Ramnath Kovind and handed over his resignation, along with that of the Union Cabinet. The resignations were accepted and Mr. Modi has been asked to continue till a new government, again under him, takes charge.

For those surprised at the spread of the BJP across the country , the victories from unlikely areas were not exactly unexpected within the party.

Three and half years ago, BJP president Amit Shah, going by the principle that the party may or may not repeat its sweep of the Hindi belt and Maharashtra in 2019, set his eyes on 113 seats where the BJP had never won but had registered some vote share.

In 2019, the party fielded candidates in 82 such seats and had a 50% strike rate and won 42 seats. Odisha, West Bengal and the North East accounted for of these 24 seats. This was a very successful “Plan B” in the event of the party falling short in U.P., which, of course, it didn’t.

Making major gains in West Bengal and Odisha while holding his own in northern India, Prime Minister Narendra Modi cruised to a second term in office, with the BJP alone looking set to win just over 300 seats in the seven-phase Lok Sabha election.

Decimating the Opposition alliances in Uttar Pradesh and Bihar, the BJP ensured that the Congress, which hovered around a tally of 50, would not be able to claim the official position of the Leader of the Opposition for the second time running. The defeat could trigger major churn in the Opposition ranks, particularly in the Congress.

The loss is an embarrassment to the JD(S) as the district had eight JD(S) MLAs, two MLCs and three Ministers, with the incumbent MP also from the party. Moreover, Mr. Kumaraswamy had camped here for weeks campaigning for his son in a high-pitched ‘David vs Goliath’ battle.