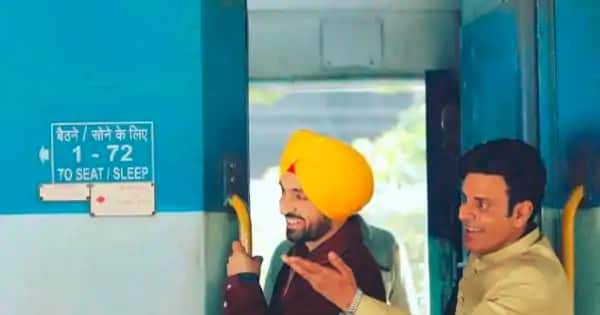 Actor-singer Diljit Dosanjh says his performance in Suraj Pe Mangal Bhari should not be compared with his versatile co-star Manoj Bajpayee’s. Dosanjh calls Bajpayee a living legend, adding that he has drawn inspiration from the industry senior in his early days. Diljit was interacting with the media when he visited a local theatre to know audience reaction about his recently released film along with his co-actor Sana Fatima Shaikh and filmmaker Abhishek Sharma on Sunday in Mumbai.

“He is a living legend. I have watched his films during my childhood days and I have taken a lot of inspiration from his work.

I was born in 1984 and during that time, he used to come to Punjab to do theatre plays and he has told me this while we were shooting for this film, so I don’t think that my performance should be compared with his performance in the film,” said Dosanjh, commenting on the fact that many among the critics and in the audience have made such a comparison.

Suraj Pe Mangal Bhari is the first film to hit the theatres after a hiatus of around eight months. The Central government of India had prohibited screening of films in theatres since March due to rising cases of Covid-19.

Talking about audience response to film, Diljit said, “We are here to thank the audience because they have stepped outside their homes and watched our film during these times. Now, people coming to theatres is a big thing for all of us and on top of that, their appreciation for our film is like an added bonus for us.”

“We also want to thank theatre owners who have decided to screen our film. I am feeling really glad seeing that they (theatre owners) have taken the maximum amount of precautions for the safety of the audience,” he added.

Diljit’s film Good Newwz was a hit. It also stars Kareena Kapoor Khan, Akshay Kumar and Kiara Advani. Since Suraj Pe Mangal Bhari has released in theatres, it will be interesting to see how it performs since the Civid-19 pandemic is still here.