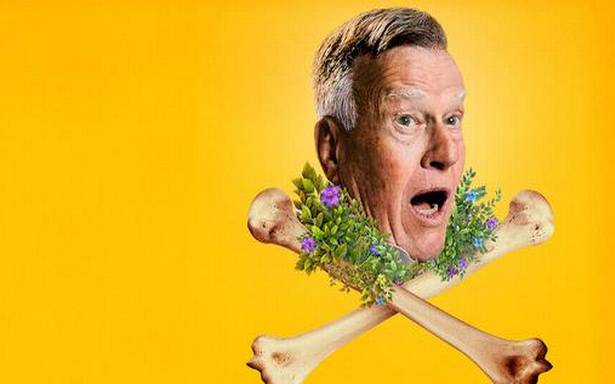 Filmmaker Kristen Johnson’s part-real, part-fantasy docu-drama about the death of her father is an evocative film that any child, insecure about their parents’ eventual disappearance, would relate to

A few years ago, our family had the worst emotional crisis — dealing the loss of a dear one. I lost my aunt — my mother’s sister — who was battling cancer for at least 10 years. Somewhere we knew she was going to fade away, but were trying to manufacture hope. I remember the time when the doctor pulled us out of the tyranny of that empty room, to say she was slipping away and to come to terms with reality. We were prepared, but never fully prepared to face the music, to face grief.

It is a harbinger of hope and despair; The End as well as a beginning, for some; an absolution from the sentence and a punctuation to the succeeding paragraph — a full stop, if you will.

Of course, I cried that day, more so when I realised I had no recent recollection of my aunt; she was physically away and was on a vacation to the US, before she went to a place far from reach. My immediate, instinctive response was to go through the WhatsApp messages and the audio notes she sent me, and boy oh boy, did that break me!

What does our personal loss have to do with Dick Johnson Is Dead? That is what the documentary does to you; it forces you to look deep inwards, and reflect. There could be nothing worse, nothing more cruel, than deleting the contact of a loved one, more so if you are plagued by life’s greatest blessing and a sin: memory.

In the documentary, filmmaker Kristen Johnson takes up a subject that is the worst fear of every child: coping with the feeling of losing your parents, more so their memories. Halfway through the film there is a portion which has stock footage of Kristen’s mother, who died of Alzemiers and who tries to recollect who Kristen was and where she is, at the moment. “I have been a documentary filmmaker for 30 years and this is the only footage I have of mom,” says Kristen, with a crack in her voice.

One suspects it was this footage that, perhaps, drove Kristen to make a documentary on her father, for, through the film, she not alone preserves the memories of them but accepts death, as theory and as form. She captures every bit, every last detail of her father Richard Johnson — there are shots of him taking a nap; savouring his favourite chocolate fudge, of his gestural movements; his hands and feet, of his mere existence inside and outside of the camera — who is a psychiatrist and is in the last quarter of life. He has dementia and the condition worsens when his memory begins to give up on him, forcing the intervention of Kristen and he moves in with her.

She paints a tender, heart-rending portrait of her father through Dick Johnson Is Dead, which is hilarious, moving and contemplative about life and death. The humour is acidic but humane at the same time — this would not have been possible without a sport that is Richard Johnson. His face radiates calm and serene, always carrying a charming smile making the documentary all the more effective and affecting. Though equally enthusiastic and overwhelmed by the process of filming his own death as Kristen, there are moments when Johnson is off and sad, perhaps, contemplating the inevitability and yet living with the weight of the present reality.

Kristen and Johnson are Adventists. According to Seventh-Day Adventism, the dead have to wait to be resurrected to heaven — “She kills me multiple times. I am the resurrected dad,” says Johnson to a stunt performer, who has come to suggest a mode of death, for the shoot. She coaches her dad to die; writes his death sentence, killing him softly but painfully. For instance, he takes a stroll when a box drops on his head and dies at the spot, one time. In another instance, he takes a fall from the stairs, while Kristen asks him to adjust his hand a little for the camera.

Every time Johnson dies, Kristen *cuts* the camera, which means she is also cutting the link between what is real and fantasy. The manner in which she kills her father might seem cruel, but you could sense how hard, how troubled she must have been to lose her father.

She only reveals bits of Johnson in the film, and we only see fragments until we form the complete picture of the person he was/is and will be. We come to know of the cardiac arrest he had in 1987 and how he lived for “30 more years”, and how he always felt ashamed of his underdeveloped toes.

What Kristen has achieved through her film is to give her father a fitting farewell, or at least a sense of it, when he is still alive and walking. Which is why the film’s tear-jerking moments come from the artificial scenes — the one where they select a coffin box for him, the one in Heaven, where he is performing a ballet with his wife, or where we see Christ healing his toes with water. In one scene, we literally see Johnson’s spirit lifting.

Perhaps Kristen got it right; death is indeed a celebration of life.

There is something about Dick Johnson Is Dead that made me tear up more than I would, normally. “The deepest fear is of being left behind,” says one of the characters. Though we know that everything is “staged” and “cooked”, it is difficult to look at it as a piece of performance, especially when the grief sticks out and suffocates us. Early on, when Johnson lies in a coffin — even if momentarily and for the camera — his close friend turns his face away from him. “Everybody has to prepare; everybody dies. I know this is a movie and weird stuff, I cannot watch it,” he says.

In the film’s final portion, when everyone comes to bid a parting goodbye, it is Johnson’s friend who delivers the final speech and has an emotional breakdown. “Oh no, he thinks it is all real,” says Johnson, peeping from the outside.

Johnson comes back (LoL) to greet the attendees of his own funeral — something all of us, at some point, have dreamed/thought about. The camera slowly pans to a person weeping and choking on his tears at the corner, unable to accept the feeling of being left alone. It is not Johnson’s daughter, but his friend. Now, who will tell him?

Dick Johnson Is Dead is streaming on Netflix

10/09/2020 Lifestyle Comments Off on ‘Dick Johnson Is Dead’ movie review: A swansong to a sweetheart
TV & Movies