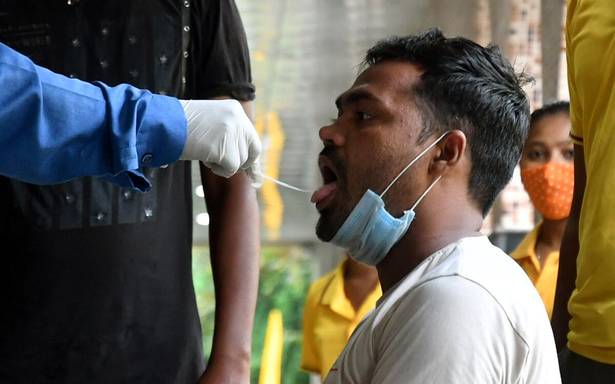 The West Bengal government on Thursday extended the ongoing Covid-19 restrictions till October 30 but allowed movement of people and vehicles at night during the Durga Puja festival from October 10 to 20, according to an order.

On Thursday, India recorded 23,529 fresh cases in 24-hours. During this period, 311 more people lost their lives to the virus.

Keeping in view a rise in the COVID graph after major festivals in some parts of the country, the Odisha government on Thursday prohibited gatherings during the upcoming Durga Puja celebrations and increased night curfew timings in Cuttack and Bhubaneswar by an additional two hours during the festivities.

Special Relief Commissioner (SRC) P. K. Jena said that there will be graded unlocking throughout the state from 5 AM on October 1 till 5 AM on November 1.

"Congregations for Durga Puja will not be allowed. It has been observed that unrestricted religious celebration by large gatherings led to a rise in infection rates in some parts of the country.

"Night curfew will continue to be imposed in all urban areas from 10 PM to 5 AM, but it will be in effect from 8 PM to 5 AM in Bhubaneswar and Cuttack from October 11-20," he said.

The period coincides with the Durga Puja and Dussehra celebrations.

The Mumbai civic body on Thursday said no ‘garba’ events will be allowed during the upcoming Navratri festival in view of the coronavirus pandemic and capped the height of Goddess Durga idols to four feet for community mandals and two feet for household ones.

The Brihanmumbai Municipal Corporation (BMC) urged citizens to scrupulously follow COVID-19 protocols and keep celebrations low-key in view of the pandemic as it issued guidelines and standard operating procedure (SOP) for the nine-day-long Navratri festival which begins on October 7.

For the second straight year, the popular festival will be celebrated under the long shadow of the pandemic.

"In continuation of the earlier order, restriction and relaxation measures as already in force stand extended up to October 30…. In view of the ensuing festive period the said restriction relating to movement of people and vehicles between 11 pm to 5 am is relaxed during October 10 to 20," the order by the West Bengal government read.

The order shall come into effect from October 1.

The government has decided not to allow local trains to run, though Metro Railway trains would continue to be operational.

The state has permitted public buses, taxis and autorickshaws to operate at 50% capacity.

Offices, both government and private, are also allowed to function with half the manpower.

Beaches and recreation centers reopened in Cuba’s capital Thursday after authorities announced it was time to resume outdoor activities, including strolling on the Malecon coastal promenade that has long been a gathering place for Havana.

Officials said the reopening was decided on because 90% of the city’s residents are vaccinated against the coronavirus and the number of new cases has been declining.

Some people were quick to take advantage of the announcement and headed to the beach to enjoy the sun and sand.