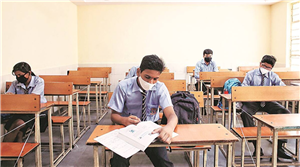 Going by the pass percentages of the Secondary School Certificate board exams conducted in the past two years, this would add almost 3-3.5 lakh students in Class 11 in the new academic year. In order to accommodate nearly 8.57 lakh students in the wake of mass promotion for Class 10 this year, the state government is staring at an estimated shortage of around 3,000 classrooms and nearly 6,000 teachers for Class 11 students. Going by the pass percentages of the Secondary School Certificate board exams conducted in the past two years, this would add almost 3-3.5 lakh students in Class 11 in the new academic year.

The state government has, however, ruled out chance of building new classes in government and grant-in-aid schools for the purpose and adjust these additional students by running schools in two shifts, when these return to offline classes.

Sources in the education department said that for the shortage of around 6,000 teachers, the state government plans to rope in visiting teachers rather than recruit new faculty for higher secondary government and grant-in-aid schools.

“Since the department already has a policy for visiting teachers in place, this will be used for additional students going to Class 11 following mass promotion,” a senior education official said.

Education Minister Bhupendra-sinh Chudasama told The Indian Express, “We have prepared an estimate and the possibility of running classes in shifts is being worked out to adjust additional students.” Chudasama added that the exact situation would be known only once schools reopen physically.

Such a situation has arisen for the first time in Gujarat where GSHSEB will not be conducting Class 10 exams and all students are being mass promoted. Even during the time of Nav Nirman Andolan of 1974, Mandal Commission protests of 1990, Bhuj earthquake of 2001, 2002 Godhra riots, class 10 exams were conducted, in a case or two conducted late but there was no mass promotion, GSHSEB officials said.

Going by the Gujarat Secondary and Higher Secondary Education Board’s Class 10 results in the last two years, the additional number of students who will be promoted will be anywhere around 3-3.5 lakh. This will lead to an immense infrastructural and human resource pressure on government and grant-in-aid schools across the state. While it is also estimated that districts that have been reporting a low pass percentage result would be a tough task to manage.

For instance, Dahod that had reported the lowest pass percentage in 2020 (47.47 %), considering the mass promotion, the district has to make arrangements for additional around 15,000 students in Class 11. Similar is the case with Chhota Udepur and Tapi.

“How many students get admitted in Class 11 is also a factor to consider though the education department will not deny anyone admission. To address the issues of infrastructure and teachers, the option of two shifts or odd-even formula is being worked out,” said Dahod district education officer (DEO) Kajal Dave.

Speaking about the numbers, based on the data collected by the education department from all districts, the official said, “Since 60 students in one class is the upper limit and at present in majority of the schools we have 40 students, so some additional numbers would be adjusted. Also, after the implementation of Right to Education (RTE) Act in Gujarat in 2011-12, Class 8 that was so far in the secondary school was brought down to primary schools. Due to this, we have spare classrooms available in government and grant-in-aid secondary and higher secondary schools.”

The GSHSEB on June 3 had declared the guidelines for result preparation of GSHSEB-affiliated Class 10 regular students.

As per the GSHSEB’s guidelines to all district education officers, marks obtained in Class 9 periodic tests and Class 10 unit tests will be considered for preparation of Class 10 results. The students who fail to achieve minimum of 26 marks in each subject (out of total 80) and 7 marks out of 20, will too be mass promoted.