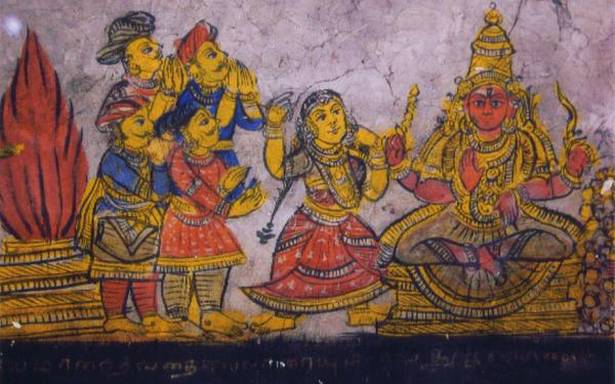 The imposing 216 ft high granite vimanam of the Brihadeeswara temple, a grand edifice built by Raja Raja Chola I, today stands like a silent sentinel looking over Thanjavur, the ancient city that defines Tamizh life and ethos.

What Benaras is to the north as an axis of culture, Thanjavur is to the south. So after the festival to mark India’s 75th year of Independence held at Kasi, IGNCA (Indira Gandhi National Centre for the Arts) decided to hold a similar event at this UNESCO-recognised world heritage site down south.

The festival, titled ‘Thanjavur Utsavam of Iyal, Isai and Natakam’, (February 11 to 13) has been curated by eminent dancer-scholar and IGNCA trustee Padma Subrahmanyam, whose personal journey in art is deeply entwined with the history, art and architecture of the city. Her pathbreaking research on karanas as depicted in the sculptures at Brihadeeswara temple, Sarangapani temple (Kumbakonam), and Nataraja temple (Chidambaram), and their reconstruction has been a significant contribution to the Bharatanatyam vocabulary.

Talking about the process of putting together a festival that will reflect the many dimensions of Thanjavur, Padma says, “It was extremely challenging to showcase it in just three days. The attempt has been to capture the city’s vast cultural landscape. Apart from dance and music concerts, we explore its rich past through lec-dems and seminars too.”

Padma’s bond with Thanjavur, particularly the Brihadeeswara temple, became stronger when she spent many days in the karana chamber, located in the first tier of the vimanam, as part of her research. “The chamber, which contains 81 of the 108 karanas, was discovered in 1956 by an Archaeological Survey of India employee while clearing away weeds. They show Shiva in the dancing posture. The then ASI joint director-general T.N. Ramachandran identified these sculptures as karanas portrayed in the Natya Sastra. Interestingly, when Raja Raja Chola was getting these karanas sculpted, far away in Kashmir, Abhinavagupta was writing his commentary on the Natya Sastra, the only one available today on the monumental work,” says Padma.

The chamber, which over the years remained closed for visitors, will be re-opened on the last day of the festival for a few hours by the ASI, which is partnering the event along with South Zone Cultural Centre. Padma is delighted to be back at her “research and learning lab” to conduct a brief lec-dem with her students to explain the karanas.

Veteran Bharatanatyam guru T. Herambanathan, who belongs to the nattuvanar family of Thanjavur, says such festivals are important to turn the spotlight on the traditional practitioners of the dance. “How else can you preserve the identity of an art form and the city where it evolved? he asks.

On the opening day of the festival, Herambanathan’s sishyas will perform melaprapti and alarippu, while he will present a lec-dem on ‘Thanjuvar bani adavus’ on the closing day. “With an easy exchange of style today, bani may have lost its relevance, but one cannot deny that it lends a distinct character to one’s dance. For instance, the Thanjavur bani is defined by anga suddham, nidhanam, and kalapramanam,” he says.

This is where the Thanjai Naalvar (Thanjavur Quartet), brothers Ponniah, Chinniah, Sivanandam, and Vadivelu, established the Bharatanatyam performance structure by putting a repertoire or margam in place. “We continue to draw from their precious treasure of jathiswaram, sabdam, padam, javali, varnam, and thillana. Each piece has been set so impeccably that it hurts to see dancers tamper with it. I hope through such festivals we can uphold this heritage,” says Herambanathan.

One of the lec-dems, aptly titled ‘Art as a way of life in Thanjavur’, will be presented by the 72-year-old scholar, Rama Kausalya. Having lived in the city all her life, she says, “We are fortunate to have been ruled by the culture-loving Cholas, Nayaks and Marathas, who made art an intrinsic part of daily life. A reason why Thanjavur not only boasted of eminent artistes, but passionate rasikas too.”

She mentions how Raja Raja Chola brought Thevaram manuscripts from the Chidambaram temple and employed odhuvars (Swaminathan and Sadgurunathan Odhuvars will perform at the festival) to sing at Brihadeeswara temple. He also had 400 accomplished dancers (whose names are inscribed on the temple wall) perform at the temple every day.

But art in Thanjavur was never restricted to the classical. The rulers exposed people to myriad genres. “Bharatanatyam, Bhagavata Mela, Yakshagana, Harikatha, Carnatic music (Thiruvaiyaru nearby was home to the Trinity of composers), Abhang and Therukoothu continue to co-exist here,” she says.

King Serfoji II went a step further and introduced European music. His deep engagement with it led him to launch a full-fledged European wind band in Thanjavur, which was very popular at one time.

It is this confluence of cultures that the three-day utsavam hopes to showcase along the banks of the Cauvery.