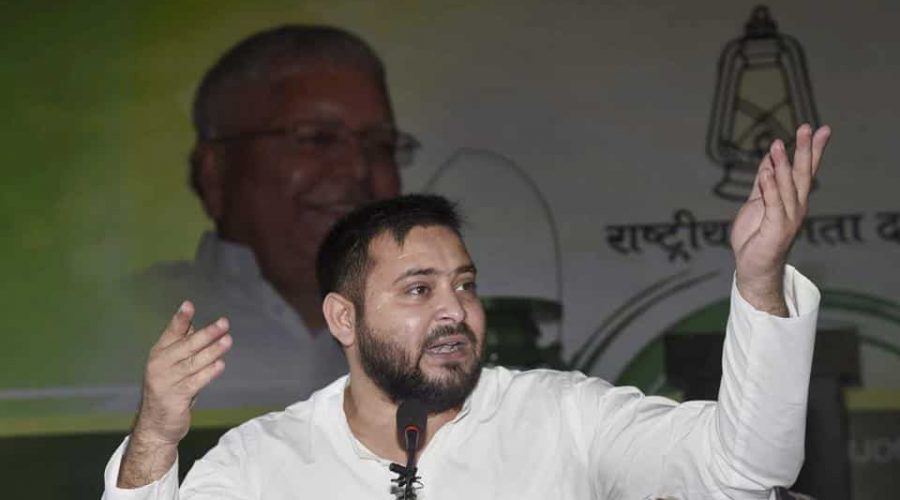 Leader of the Opposition Tejashwi Prasad Yadav in the Bihar assembly will file his nomination papers from the Raghopur constituency in Vaishali district on Wednesday afternoon. Bihar’s three-phase assembly elections begin on October 28.

Ahead of his nomination, Yadav attacked chief minister Nitish Kumar in a tweet for raking up “30-40 dead issues” by shying away from talking about the present, future and his own 15-year-old tenure. Yadav’s tweet was a retort to the Janata Dal (United) (JDU) strongman’s aggressive attacks over the past two days in his virtual rallies against the 15-year-old Rashtriya Janata Dal (RJD) rule from 1990 to 2005 led by RJD chief and former chief minister Rabri Devi .

“ The rule of husband and wife (Lalu Prasad Yadav and Rabri Devi) did nothing for the state’s development, be it in terms of generating employment, health or infrastructure and environment conservation. Law and order also took a nosedive during the period,” said Nitish in his speeches.

Yadav tweeted, “He is not talking of rampant unemployment, migration, poor education facility and deteriorating law and order situation. Now, we want accountability and answers also.”

Yadav has also slammed the chief minister for his indirect attack on him of talking about providing jobs without having any experience in governance. “Nitish Kumar should know that I had headed the road construction department and other departments during my stint as deputy chief minister for 18 months and steered several mega projects and development works. I faced not a single allegation of corruption in my tenure and brought in more transparency in governance,” he said.

However, RJD insiders said the contest in Raghopur would not be a cakewalk for Yadav, who has high stakes in the election given that he is the face of the grand alliance and the chief ministerial candidate of his party. The 30-year-old Yadav scion will contest against his old rival and Bharatiya Janata Party (BJP) candidate Satish Kumar for the seat. In the 2015 assembly election, Yadav had won the seat, defeating the BJP candidate by a margin of 22,733 votes.

Sources said the exit of senior RJD leaders from Raghopur constituency, like former minister Uday Narayan Rai alias Bhola Rai, and other junior leaders at the block-level, a month ago to join the ruling JD(U) has caused trouble for the RJD. “Initially, the JD(U) was eyeing the seat to field its own candidate but it went to the BJP quota,” said a source. The JD(U) is contesting four seats in Vaishali district.

“The contest is tough for Yadav as the BJP and JD(U) are again fighting together. The traditional vote base of RJD, especially Yadavs will be crucial and any division in the core vote base could spell trouble for the party,” said a senior RJD leader. BJP candidate Satish Kumar, also from the Yadav caste, is also banking on caste votes apart from that of EBCs , minorities and upper castes.