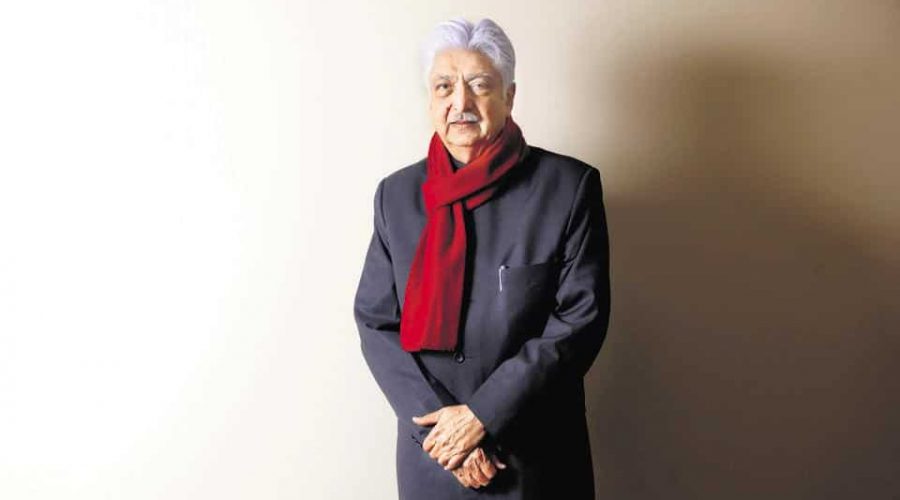 Azim Hasham Premji would have won admiration even if he hadn’t given a penny to philanthropy. For over half a century he has run a conglomerate that has served as a benchmark for ethical business in India.

But such is the size and scale of his benevolence that one is forced to look beyond that singular achievement. Over the last two decades, Premji has given 92% of his wealth in the form of shares in his flagship company Wipro Ltd, to the Azim Premji Foundation. Over the years the value of the shares has kept growing, and in March 2019, the foundation in a release announced that Premji’s total donation was now valued at $21 billion or Rs 1.45 lakh crore.

And he isn’t done yet. After giving away the bulk of the shares he holds in Wipro (leaving only 7% for his family), Premji, 75, is now considering donating another 20% of his shares in Wipro Enterprises, the privately held consumer and infrastructure engineering business, with sales of more than $1.5 billion, to the Foundation. That too will run into billions.

It isn’t just the numbers, but the insistence that he’s merely doing what is right, that makes him a hero for our times. He inspires men like Sunil Rajaram Choudhary, a 49-year-old wine merchant in Amalner, the small town in Maharashtra where the first Wipro plant to make vegetable oils was set up. Choudhary has been spending nearly one lakh rupees every year for the last five years donating safety gloves to municipal sewage workers. He says he was so impressed when he read about Premji’s contribution to improving primary education in the country that it made him think about how he could contribute too.

It is these unknown but noteworthy stories that underline the importance of this man with a wicked smile and a funny moustache to Indian society and business. Not that Premji really cares what society makes of him. His philanthropy is a deep-rooted belief which emanates not from any need for recognition or redemption. In fact, he considers the light it casts on him unnecessary and unjustified.

In this, he judges his admirers a tad unfairly. The hype that he so dislikes is meant to hold up a mirror to India’s notoriously tight-fisted (except when it comes to self-aggrandisement) billionaire class. Last year, India was ranked a lowly 82 out of 128 countries for generosity over the previous 10 years, as per the CAF World Giving Index. For a country with 117 billionaires, the support extended to the lakhs of poor migrant families as they trudged their way home after the announcement of the lockdown in March this year was shocking.

But then the billionaire tag sits uncomfortably on Premji, who shuns the usual trappings of this exalted club. A workaholic, his passion is work and philanthropy is an extension of that.

Its source spring can be traced to his mother Gulbanoo Premji, who devoted her life at the Children’s Orthopaedic Hospital in Bombay to helping children stricken with polio. As a boy, Azim would often accompany his mother to the hospital and the first seeds were planted.

It would of course take him half a lifetime to get to the point where he could make a difference and it came just when he was first crowned one of the richest men in India. In 2001, the vehicle for his entry into philanthropy was ready, as was his mission — simply put, it was to improve the quality of teachers and teaching in the country. He was lucky that at the very outset in 2001 he found in Dileep Ranjekar an able ally who shared his zeal and his sensitivity but also brought rare skills to steering the Foundation. Both Ranjekar and Anurag Behar, who became the co-CEO in 2010, were corporate executives at Wipro before they were co-opted to run the Foundation.

The task was always challenging since for 20 years Premji has had to juggle between the differing requirements of the business and the Foundation. A careful man and an even more careful business leader, he has always kept a hawk’s eye on his companies’ quarterly results. But realising the long-term nature of his philanthropic mission, he allowed it to find its own rhythm, accepting, as Ranjekar put it “the long cycle time it takes to bring about social and educational change.”

Where Premji has failed though is in building an institutional framework with a large enough team much as the Bill & Melinda Gates Foundation has done over the years with visible results. By contrast the Azim Premji Foundation’s results have been uneven. The awareness is there but not the kind of impact $2 billion in spending would have been expected to make.

This mirrors the mixed fortunes of his $10 billion conglomerate. Wipro, among the pace-setters of India’s IT services boom at the turn of the century, has since largely trailed its main rivals, TCS, Infosys, Cognizant and HCL.

Through the late 1990s and into the first decades of this century, as India’s IT firms grew rapidly on the global stage, their founders flourished. Many, like Shiv Nadar of HCL and NR Narayana Murthy and Nandan Nilekani of Infosys, became billionaires thanks to the rising value of their stocks. But they refused to let their lives revolve around spending the wealth they had earned. Instead they turned their attention to using it for good and in the process have become role models for newer IT millionaires.

It is in that rare galaxy of philanthropists that this man with the personal habits of a miser and the heart of an extravagant spendthrift, shines bright.

(The writers are business journalists whose book Azim Premji: The Man Beyond the Billions was published in October 2020)