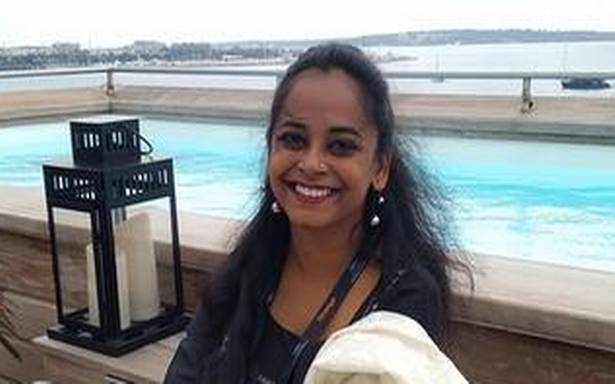 India had a brief moment in the sun at the Cannes Film Festival on Friday night when the young Indian director of photography, Modhura Palit, was given a special encouragement award during the Pierre Angénieux ExcelLens in Cinematography ceremony opened by the General Delegate of the festival,Thierry Frémaux, in Salle Buñuel at Palais des festivals. The award highlights the promising work of a young film professional and will offer Ms. Palit the opportunity to use the best of the Angénieux technology for the images of her next pr oject.

Ms. Palit, dressed in an orange and green silk sari, is the first Indian and the first woman to get this recognition. A graduate of the Satyajit Ray Film and Television Institute of Kolkata and a member of the Indian Women Cinematographer Collective, Ms. Palit is a freelance cinematographer who has been working primarily on independent films.

She said the recognition seems unreal, like a fairytale. In fact, when she got the information on E-mail, she thought it was a spam. Ms. Palit hoped that her award would encourage young girls to take to a profession that is considered “manly” while also hoping that that the idea of “woman” cinematographer will also go away some day. “You can’t genderise a craft,” she said.

The big award for the day, the Pierre Angénieux ExcelLens in Cinematography honour was bestowed upon Bruno Delbonnel (AFC, ASC), renowned French director of photography with five Oscar nominations for Best Picture (Le Fabuleux Destin d’Amélie Poulain in 2002, Un long dimanche de fiançailles in 2005, Harry Potter and the Half-Blood Prince in 2010, Inside Llewyn Davis in 2014 and Darkest hour in 2018).

Meanwhile, a Brazilian film, Karim Ainouz’s The Invisible Life, about two inseparable sisters, with common hopes and dreams, who are forced to live away from each other, walked away with the Best Film award in the Un Certain Regard section of the Cannes Film Festival.

Russian Kantemir Balagov bagged the best director award for the Cannes favourite Beanpole, about two women in Leningrad rebuilding their lives from the wreckage of Second World War.

Neighbours Canada and U.S. got to share the Coup de Coeur prize with Monia Chokri’s A Brother’s Love and Michael Angelo Covino’s The Climb, respectively.

Two period pieces, that left the critics divided, also walked away with awards — Jeanne (Joan of Arc) by Bruno Dumont got a special mention, while a Special Jury prize went to Liberte by Albert Serra that faced multiple walkouts at its premiere screening for its explicit portrayal of sex.

In a statement, the jury expressed great pleasure in having dived into the diversity of selection; diversity that reflected on many levels: subjects, the way cinematic tools were used and the portrayal of characters. The statement said: “It was very stimulating to have seen, side by side, filmmakers that master their language so well and others still finding their way to mastery… We were honoured to be transported into all these different universes. World cinema remains very much alive and in good shape!”

05/25/2019 Lifestyle Comments Off on At Cannes, Modhura Palit gets India its moment in the sun
India