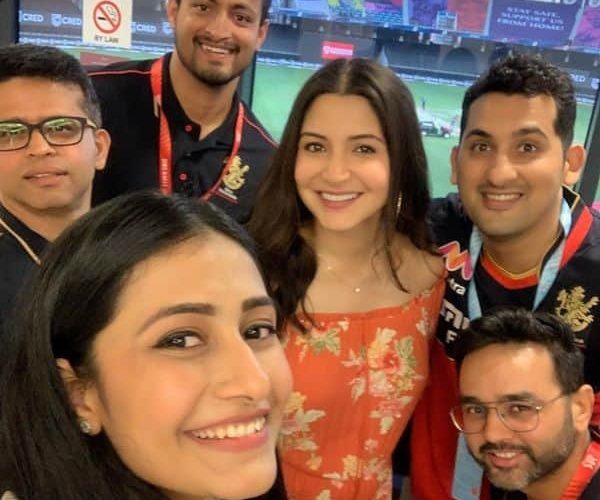 Anushka Sharma, who is pregnant with her first child, is currently in Dubai and enjoying the IPL 2020 matches. She is often seen cheering for her husband Virat Kohli who is leading the Royal Challengers Bangalore team. YouTuber Dhanashree Verma, the fiancee of cricketer Yuzvendra Chahal recently attended her first IPL match on Saturday. And after the RCB win, she decided to click a selfie which also had Anushka Sharma, actor-comedian Danish Sait and cricketer Parthiv Patel in the frame.

While the picture had many well-known faces, it was Anushka’s pregnancy glow that got maximum attention on social media. In the picture, Anushka was seen wearing a loose floral orange dress and was flashing her smile while flaunting her baby bump.

After RCB beat Rajasthan Royals (RR) by seven wickets, Dhanashree shared the picture on her Instagram and wrote, “Happy people. Sharing some happy moments from my first match. Congratulations to the team @royalchallengersbangalore.”

Earlier, Anushka was spotted in the stands cheering for Virat. She was seen clapping and blowing kisses for his husband as he battled it out against the Chennai Super Kings (CSK).

Anushka had recently wrote a note on the ‘privilege’ of having a male child. “In our society, having a male child is viewed as a ‘privilege’. Of course, it’s no more privilege than having a girl child but the fact is that this so-called privilege has been viewed incorrectly and with an extremely myopic view. The only ‘privilege’ is that one has the opportunity to raise a boy in a way that he respects a girl. That’s your DUTY as a parent to society. So, don’t think of it as a PRIVILEGE. The gender of the child doesn’t make you privileged but it is actually the responsibility you owe to society to raise a boy so well that women feel safe and protected.”