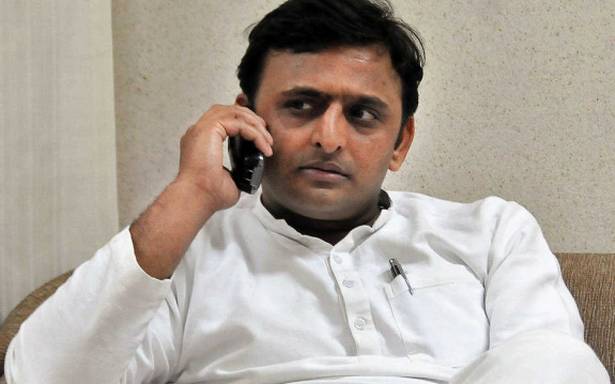 “The ‘Samajwadi Vijay Yatra’ aims to make people aware about the corrupt, autocratic and suppressive policies of the BJP government and to establish real democracy,” the party said.

Seeking to galvanise public support ahead of Uttar Pradesh Assembly elections, Samajwadi Party supremo Akhilesh Yadav will be commence a yatra from Kanpur on Tuesday.

“The ‘Samajwadi Vijay Yatra’ aimsto make people aware about the corrupt, autocratic and suppressive policies of the BJP government and to establish real democracy,” the party said in a statement on Monday.

Mr. Yadav will travel in a Mercedes bus, which has been turned into a ‘rath’ having posters of Akhilesh Yadav displayed on one side and that of party founder Mulayam Singh Yadav on the other, besides a picture of party leader Mohammad Azam Khan.

A day before the yatra, the party released a 17-second video in which Akhilesh Yadav is seen talking to his father Mulayam Singh Yadav and touching his feet to get blessings.

BJP leader and U.P. government spokesperson Sidharth Nath Singh took a swipe at Akhilesh Yadav, saying “the one who dumped the harried people during the corona times is going to the public in his five-star rath” and termed it as “another insult to the people of the State”.

The SP said that yatra will start from Kanpur and in the first two days on October 12-13 it will cover Kanpur Dehat, Jalaun and Hamirpur.

“The yatra aims to provide justice to farmers, youths, dalits, the deprived, the backward, minorities and all sections and rid the state of autocratic and suppressive government,” SP spokesperson Rajendra Chowdhury said.

Mr. Chowdhury said it was the third such yatra by Akhilesh Yadav after the ones in July 2001 and September 2011.

The politically crucial State is again headed for a heated multi-cornered contest with all major parties such as the BJP, the BSP, the SP and the Congress reaching out to voters. Smaller parties like the Aam Aadmi Party and the AIMIM too are in the fray.

The BJP alleged that Akhilesh Yadav was “’scared and nervous” to accept that the U.P. government has been working for “a crime-free society, including the eradication of corruption, attachment of the properties of criminals and development of the State”.

In a statement, Sidharth Nath Singh said, “When CM Yogi was running from one district to another to provide relief to the people during corona, the SP leader was busy tweeting from his air-conditioned drawing room from where he will be going to land in his air conditioned luxurious ‘Rath’ pretending to go to the people.”