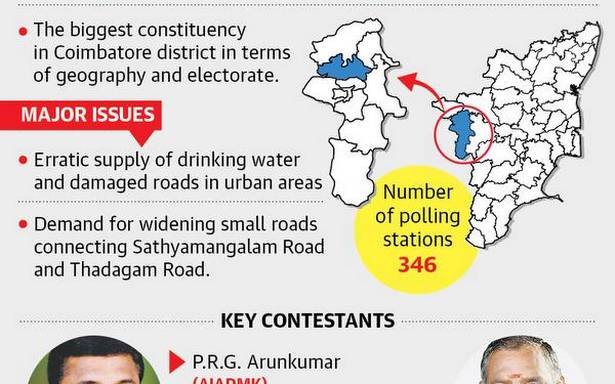 As campaigning by major parties is reaching the length and breadth of the vast constituency, voters have a range of issues and demands that they expect the next winner to address.

As in the case of most of the urban areas in Coimbatore district, residents from a majority of the urban localities in the constituency complain of erratic water supply and poor roads.

“We get drinking water once in 10 or 15 days. Poor roads and delay in the completion of infrastructure projects affect public movement. A large chunk of the population from Kavundampalayam are daily wagers and or do small jobs,” says A. Vetrivel from Lakshmi Nagar in Kavundampalayam.

According to S.G. Suresh from Chinnavedampatti, roads dug for laying drinking water pipelines have not been re-laid for about a year. Many minor accidents have occurred due to the poor condition of roads and stray dog problem, he says.

“Maintenance of law and order also needs to be improved in Kavundampalayam, Sarvanampatti and Chinnavedampatti, where chain-snatching incidents are on the rise. Important roads and junctions require surveillance camera coverage,” Mr. Suresh adds.

K. Kathirmathiyon of Coimbatore Consumer Cause feels that widening of roads connecting Mettupalayam Road with Sathyamangalam Road and Thadagam Road can reduce the congestion in Kavundampalayam and Thudiyalur.

“The Regional Transport Office at Thudiyalur, which now functions from a rented building, does not have adequate space for parking of vehicles. The earlier proposal to shift the RTO to Saravanampatti needs to be reconsidered,” he says.

The constituency is also home to a large number of micro, small and medium enterprises, majority of them spread over Kavundampalayam, Chinnavedampatti, Saravanampatti, Ashokapuram, Vellakinar, Vilankurichi and Kalapatti.

According to J. James, district president of Tamil Nadu Association of Cottage and Tiny Enterprises (TACT), more than 15,000 MSMEs function in the constituency and establishment of an industrial estate would boost their operations and productivity. He says that power outages without alert is a concern for industrial units.

“Though the Tangedco implemented shutdown of sub-stations for maintenance once in three months, they are forced to carry out maintenance works such as pruning of tree branches often. This leads to unexpected power cuts of short durations,” he says.

Saravanampatti in the constituency is known for the presence of IT companies. Establishment of low budget Government-run working women hostels for women employees who require paid accommodation is a long pending demand.

Thadagam Valley situated towards the western end of the constituency has been seeing large scale environmental degradation in the form of illegal mining of red earth by brick kilns.

Activist S. Ganesh of Thadagam says that nearly 200 brick kilns functioning in five village panchayats in the valley have been plundering red earth without obtaining any requisite permission. They also cause air pollution, he adds.

Tribal settlements in Anaikatti region that saw the implementation of welfare schemes in the last few years expect more attention from the government, says Joshua G.P.N., a social worker from the region.

According to members of Tamilaga Vivasayigal Sangam, farmers in Thadagam Valley, Narasimhanaickenpalayam and Periyanaickenpalayam want the government to protect their crops from wild animals and adequate compensation for crop loss.

03/25/2021 India Comments Off on Yet again direct fight between AIADMK, DMK
TV & Movies