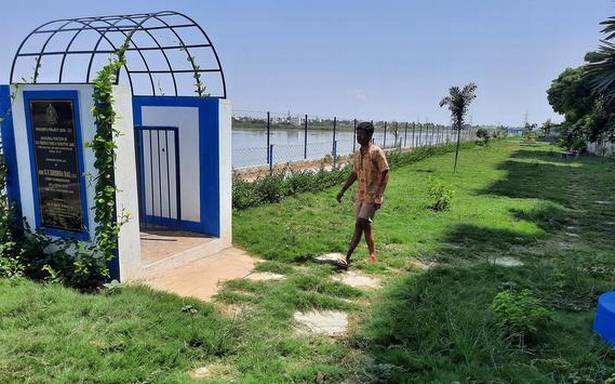 As part of the short-term plan, it will first prevent sewage flow into the lake

The Water Resources Department will soon take up work to arrest sewage flow into the Korattur lake and mitigate the problem of inundation in the area.

Tenders will be called for ₹2.82 crore short-term restoration plan that includes construction of regulators, clearing of vegetation in the lake and plugging of sewage outfalls. The project was devised based on the recommendations of the joint committee and directive of the National Green Tribunal (NGT) to prepare an action plan.

The Korattur People’s Welfare and Awareness Trust had filed an application before the NGT seeking restoration of the lake and prevention of flow of industrial effluents.

Officials said work would be taken up to fence the surplus channel from Ambattur lake to Korattur lake for nearly 3,000 metres to control dumping of solid waste. Floating material and vegetation would be removed from the waterbody.

Besides constructing a weir, a structure that allows surplus water to flow out, with regulator arrangements, regulators would be fixed in the lake’s inlet points near DTP Colony, Ondiveeran Koil and North Avenue. This would prevent inundation in the surrounding areas and regulate inflow, particularly sewage.

“We are planning to plug sewage inlets in the Ambattur surplus channel to reduce pollution of Korattur lake. This work will be taken up in Sivananda Nagar, Ambedkar Street, Kalidas Street, MKB Nagar and Dhobi Colony. We want to complete some work before the onset of the northeast monsoon,” said an official.

The long-term plan for the waterbody’s restoration includes demarcation of the lake’s boundary, removal of encroachments and augmentation of storage capacity.

Meanwhile, work to create an eco park on the left bank of the Korattur lake along the Water Canal Road had been completed at a cost of ₹16 lakh.

P. Anand Kumar, Commissioner, Appeals-II, GST and Central Excise, said the project to protect the lake from encroachments and increase green cover was funded under the ‘Swachhta Action Plan’.

The eco park covering an area of 30,000 sq. ft. on the rear side of the bund had a lawn and varieties of ornamental plants. Various facilities such as jogging track, yoga platform and benches had been provided. The facility was awaiting inauguration, he added.