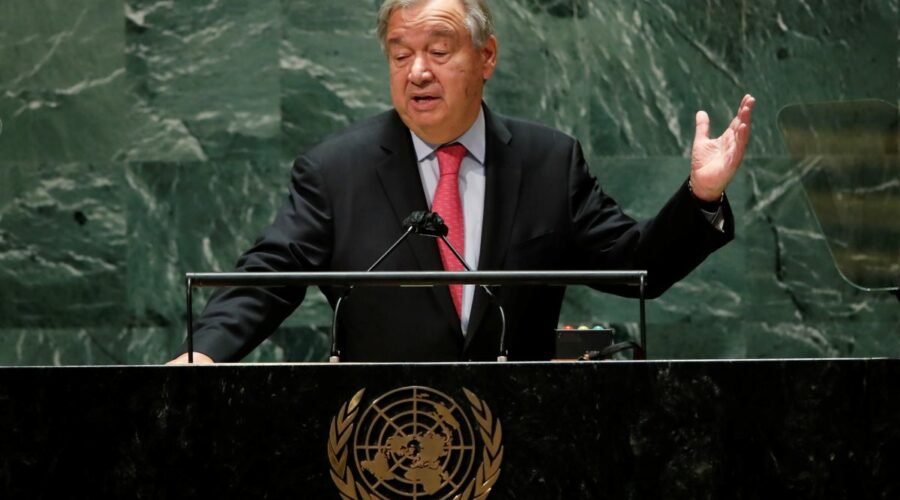 The world is seeing an “explosion” in seizures of power by force and military coups are back, UN Secretary General Antonio Guterres told world leaders on Tuesday, lamenting that geopolitical divisions are undermining international cooperation as he called for strengthening global governance and re-igniting multilateralism.

Guterres, in his address to the opening of the General Debate of the 76th Session of the General Assembly, called on world leaders to restore trust and inspire hope, saying there is a need for cooperation, dialogue and understanding.

“We are also seeing an explosion in seizures of power by force. Military coups are back. The lack of unity among the international community does not help,” he said.

“Geopolitical divisions are undermining international cooperation and limiting the capacity of the Security Council to take the necessary decisions,” Guterres said.

The annual high-level week, which had to be held virtually last year due to the raging COVID-19 pandemic, returned to a hybrid format this year with over 100 Heads of State and Government as well as foreign ministers and diplomats scheduled to address world leaders in-person from the iconic General Assembly Hall here.

Even as a sense of impunity is taking hold, it will be impossible to address dramatic economic and development challenges while the world’s two largest economies are at odds with each other, the UN chief said, making a reference to economic tensions between the US and China.

“Yet, I fear our world is creeping towards two different sets of economic, trade, financial and technology rules, two divergent approaches in the development of artificial intelligence — and ultimately two different military and geo-political strategies.

“This is a recipe for trouble. It would be far less predictable than the Cold War,” he said.

The world needs to invest in prevention, peacekeeping and peacebuilding, Guterres said.

“We need progress on nuclear disarmament and in our shared efforts to counter terrorism. We need actions anchored in respect for human rights,” he said.

The UN chief, however, noted with concern that today’s multilateral system is too limited in its instruments and capacities, in relation to what is needed for effective governance of managing global public goods.

“It is too fixed on the short-term. We need to strengthen global governance. We need to focus on the future. We need to renew the social contract. We need to ensure a United Nations fit for a new era,” he said.

Guterres said that the COVID-19 and the climate crisis have exposed profound fragilities as societies and as a planet.

Telling world leaders that “now is the time to inspire hope”, he said the problems “we have created are problems we can solve.”

As he listed the COVID-19 pandemic, climate emergency and geopolitical upheavals as “the greatest cascade of crises in our lifetimes”, Guterres said that instead of humility in the face of these epic challenges, there is hubris.

“Instead of the path of solidarity, we are on a dead end to destruction,” he said.

The UN chief said that a “malady of mistrust” is spreading in the world when people see their fundamental rights and freedoms curtailed, when they see corruption, “when they see billionaires joyriding to space while millions go hungry on Earth” and “when young people see no future at all.”

He cautioned that failure to deliver on promises creates space for some of the darkest impulses of humanity.

“It provides oxygen for easy-fixes, pseudo-solutions and conspiracy theories. It is kindling to stoke ancient grievances. Cultural supremacy. Ideological dominance. Violent misogyny. The targeting of the most vulnerable including refugees and migrants,” he said.

Guterres underlined that with a real engagement, “we can live up to the promise of a better, more peaceful world.

“This is our time. A moment for transformation. An era to re-ignite multilateralism. An age of possibilities,” the UN chief said as he gave a clarion call to restore trust and inspire hope.

The Taliban seized power in Afghanistan on August 15, two weeks before the US’ complete troop withdrawal on August 31 after a costly two-decade war. This forced Afghan President Ashraf Ghani to flee the country to the UAE.

The Taliban insurgents stormed across Afghanistan and captured all major cities in a matter of days, as Afghan security forces trained and equipped by the US and its allies melted away.

Thousands of Afghan nationals and foreigners have fled the country to escape the new Taliban regime and to seek asylum in different nations, including the US and many European nations, resulting in total chaos and deaths.