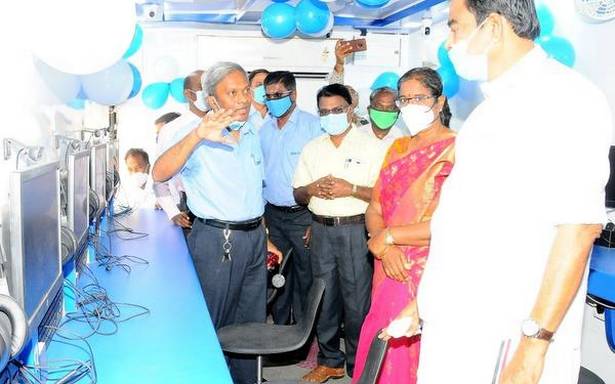 A mobile computer and digital literacy lab named, ‘World on Wheels’ (WoW), to provide basic computer training to school students and others in Ariyalur and Tiruchi districts, was launched by the Dalmia Bharat Foundation (DBF), an arm of Dalmia Bharat Group, in association with HP India.

The WOW bus would cover three blocks in the two districts and aims to train about 600 students from classes 10 to 12 initially. The bus is a self-contained, Internet-enabled and solar-powered facility with 16 computer systems to provide digital literary.

The course is focused on driving digital literacy and entrepreneurship training. It is designed by Dalmia Bharat Foundation to teach the students how to use computer for basic purposes such as writing personnel/business letters, viewing information on the Internet, sending e-mails and accessing banking services.

The bus which has features such as CCTV live monitoring and biometrics also has an interactive screen. It is also equipped with HP computing and printing equipment as well as numerous software suites and e-learning tools.

The company also plans to train anganwadi workers, PHC staff, women SHG members and farmers, among others. Unemployed youth will be trained on “Customer relationship management” under a NABARD sponsored programme, according to a press release.

Speaking on the occasion, Mr. Rajendran said the initiative was a boon to rural students at the time of pandemic. He urged the students and youths to utilise the facility to equip themselves well and improve their employability.