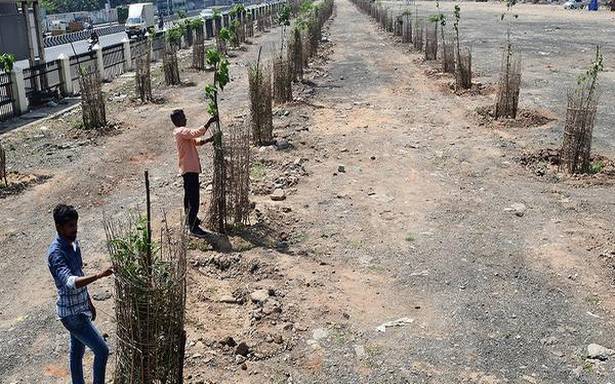 A portion of the Koyambedu wholesale market complex will be converted into a green space. Care Earth Trust, a city-based NGO, has joined hands with the Market Management Committee to increase the green cover in the market.

The periphery of the vegetable market along the Kaliamman Koil Street has nearly 300 saplings planted to increase tree cover in the vacant space. The saplings of various native species, including neem, tropical almond and portia (poovarasam), have been planted in three rows.

“This is one of the potential areas for developing green spaces. Many saplings planted two months ago have grown up to two or three feet tall. We even have bamboo saplings in the space covering around 1.5 km,” said S. Balaji, former principal chief conservator of forests and advisor, Care Earth Trust.

The Chennai metropolitan area has only 9.5% of green cover. There is a need to enhance the tree cover up to 20% to mitigate the impact of pollution. “We had proposed a five-year greening strategy to the Greater Chennai Corporation in 2018 to plant 10 lakh saplings across the city. This initiative is part of the strategy to increase green urban spaces and enhance biodiversity,” he said.

The trust is planting ornamental shrubs on the premises and is planning to promote native grass varieties. “We plan to create a small tree park, including palm and bamboo varieties, and research on native grass and climbers and replicate the efforts in other spaces,” Mr. Balaji said. However, the project ran into several challenges as the site was often used as a dumping space for vegetable waste and grazing area for cattle. Tall saplings were planted and tree guards installed. The trust is adding more greenery around the waterbodies that are taken up for ecorestoration, including the Thazambur and Sembakkam lakes.