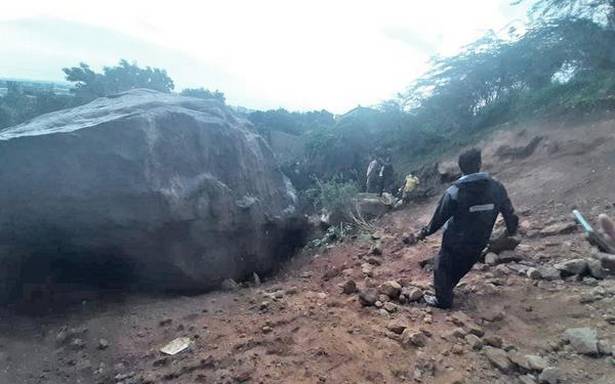 Rescuers trying to secure her daughter; houses are on the foothills of Kagithapattarai

A 45-year-old woman died after a boulder rolled off the hillock and plunged into some houses on the foothills of Kagithapattarai, off the Benguluru Highway, in Vellore on Sunday.

Fire and Rescue Services and the police launched an operation to secure her daughter, who was trapped in the collapsed house. Her father K. Pichayandi, 52, escaped unhurt.

“Encroachments, mostly houses, on the foothills will be removed soon. A plan will be devised to prevent encroachments on the foothills,” Collector P. Kumaral Pandian told The Hindu. Accompanied by Superintendent of Police S. Selvakumar and Assistant SP Albert John, Mr. Pandian inspected the spot.

P. Ramani was severely injured, along with her daughter P. Nishanthini, 24, in their house, one of the five that collapsed. After more than two hours of efforts, Ramani was rescued from the debris and sent to the Government Medical College and Hospital at Adukkamparai where she died around 6.30 p.m.

Personnel of the National Disaster Response Force (NDRF), 4th Battalion, Arakkonam, rescued seven youths, who were trapped while bathing in a lake at Mamandur-Pudur in Ranipet district on Sunday as the level in the Palar rose suddenly.

The youths held on to a mound in the middle of the lake until the NDRF team rescued them on an alert from VAO J. Jayakanthan.

A police rescue team cleared the landslip at the fifth hairpin bend on the Jawadhu Hills along the Polur-Jamunamarathur Main Road in Tiruvannamalai. The team restored traffic by the evening.

A. Vishwanathan, 60, a herder, was rescued by an NDRF team from a lake at Lakshmipuram in Tiruttani. He followed his six cows that waded through the lake.

Meanwhile, 1.30 lakh persons were vaccinated at the mega camp in Vellore, Tiruvannamalai, Ranipet and Tirupattur districts on Sunday. In Tiruvannmalai, 75,579 persons were inoculated.