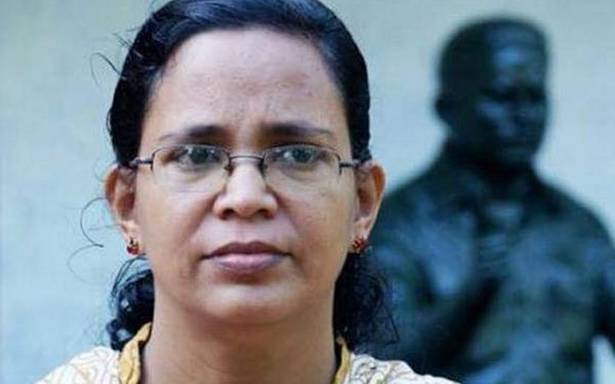 Ten of them contesting from Koyilandy, Kozhikode South, Vadakara, and Balussery

When the final list of candidates in Kozhikode district was announced, just around 10% of them were women. The 10 women are contesting to the Assembly from Koyilandy, Kozhikode South, Vadakara, and Balussery.

K.K. Rema of the Revolutionary Marxist Party (RMP) is contesting from Vadakara as a UDF candidate. Rema’s candidature was announced after a lot of suspense and drama, as she had refused to contest in the beginning. The UDF offered to support the RMP only if she was the candidate. Since her candidature was finalised at the last minute, she was far behind her opponents on the campaign front, but is catching up fast.

Rema had contested from Vadakara in 2016 and had been in the third position behind her present opponent Manayath Chandran. However, with the changed political dynamics, Rema’s possibilities of victory are far better.

Noorbina Rashid, contesting from Kozhikode South, is notable for the reason that she is the first woman to be fielded by the Indian Union Muslim League (IUML) after a quarter of a century. A lawyer by profession and having donned various mantles, including that of the corporation councillor and member of the Kerala Women’s Commission, Ms. Rasheed’s candidature is considered unconventional, yet a risky step by the party. Her non-involvement in ground-level politics had initially caused minor disgruntlement among party workers, which was soon resolved by senior leaders. However, reports are that party workers are trying hard to catch up with her dedication and boldness during campaigning.

District panchayat president Kanathil Jameela is the lone woman fielded by the LDF in the district. Contesting from Koyilandy, Ms. Jameela is riding on the developmental activities carried out by sitting MLA K. Dasan and the LDF government in general. She is a familiar face in the district as a people’s representative, especially her previous tenure as the district panchayat president, during which she initiated several welfare projects, including ‘Snehasparsam’ for kidney patients.

Navya Haridas of the BJP is not a familiar name outside the Kozhikode Corporation, but her candidature against Ms. Rashid in Kozhikode South catapulted her to fame.

Navya, a former IT professional, is known as bold and dedicated as Ms. Rasheed, but without experience in politics. The youngest of the lot, she is the BJP’s lone woman candidate in the district.

Of the remaining six candidates, five are namesakes. Among them are Jameela P.P. in Koyilandy, Mubeena in Kozhikode South, and three Remas (K.T.K. Rema, Rema K.K. and Rema) in Vadakara.

Chandrika N.K., fielded by the Welfare Party of India in Balussery, is the remaining one.