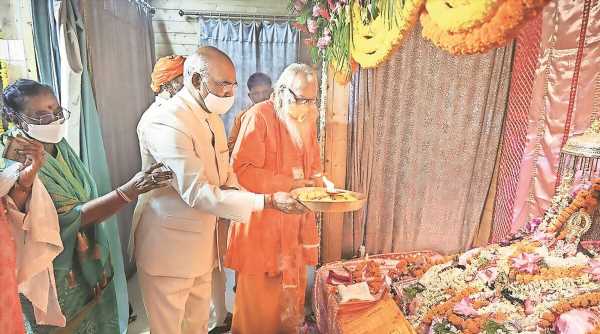 Kovind said the city could not be imagined without the deity, and emphasised that Ram belongs to everyone and “is in everyone”. 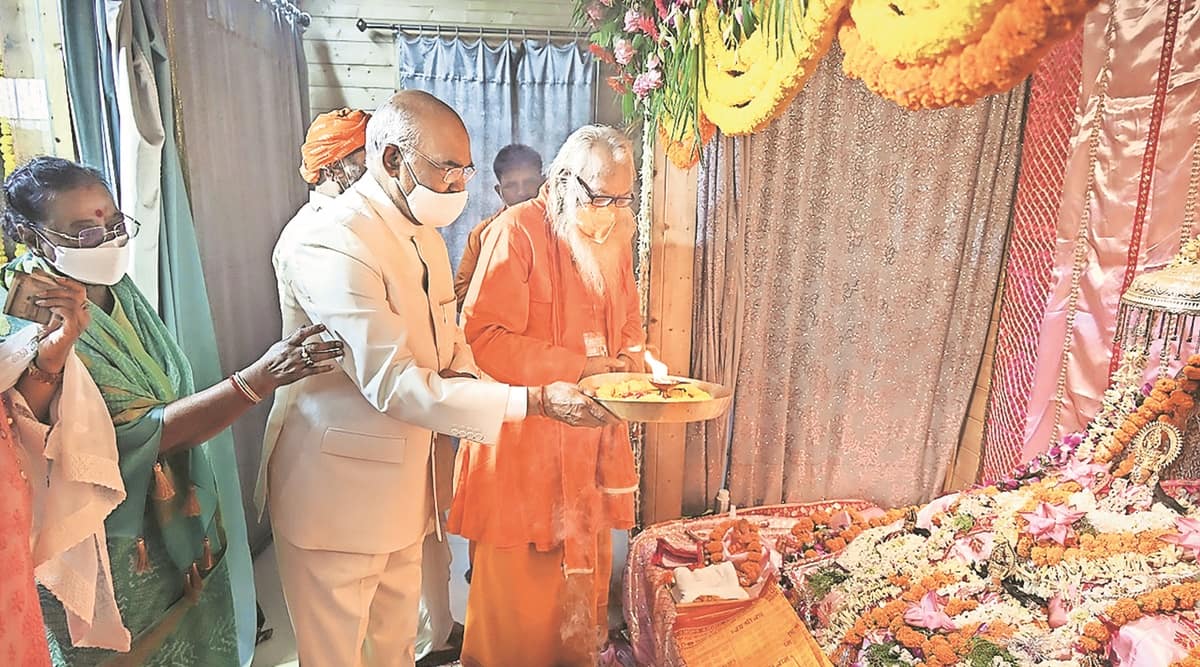 President Ram Nath Kovind on Sunday offered prayers to the deity of Ram Lalla in Ayodhya, visiting the site where a Ram temple is being built. Kovind said the city could not be imagined without the deity, and emphasised that Ram belongs to everyone and “is in everyone”.

Kovind inaugurated the Ramayan Conclave at the Ram Katha Park. Governor Anandiben Patel and Chief Minister Yogi Adityanath were among those who attended the event. In his speech at the event, the president said he hoped that following the attempts of the state and Central governments, Ayodhya would be developed as a centre of human welfare. He also hoped for the city to be an example of social harmony, and added that he wished for it to be known in the future for its “moral and spiritual culture”, and as a global hub of education and research.

Earlier in the day, the president, on the fourth and final day of his Uttar Pradesh visit, arrived in Ayodhya on a special presidential train, and inaugurated the Ramayan Conclave. Kovind visited the Ram Janmabhoomi to seek the blessings of “Ram Lalla”, and later in the day he offered prayers at the famous Hanumangarhi temple.

“Ayodhya is the birth land of Bhagwan Ram and his leela bhoomi. Without Ram, it is hard to even imagine Ayodhya. This connection of Ayodhya and Ram has been mentioned in Sanskrit poet Bhasa’s Pratimanatakam… Without Ram, Ayodhya isn’t Ayodhya. Where there is Ram, there is Ayodhya,” Kovind said.

He added, “By organising the Ramayan Conclave, the state government has taken Ramayana to the people and I appreciate CM Yogi Adityanath and his entire team. I have been told that the Ramayan Conclave last year was very much successful and it is a matter of great joy that the conclave is being organised in several UP districts this year. Spreading Ramayana is also important because the life values given in Ramayan are always relevant for humanity.”

Kovind told the audience that the conclave was important to encourage cultural and religious tourism, and increase the appeal of Indian culture. Several places connected to the Ramayana circuit, under the Swadesh Darshan programme, were inaugurated, President Kovind said, adding that it would provide several facilities to tourists and devotees. Projects related to the expansion and renovation of the Tulsi Smarak were also inaugurated.

“I am happy to be here among you all. I believe that Ramayana is such a unique book that gives a message to human beings to follow the values of life,” said the president.

Emphasising the importance of Ram in the context of Ayodhya, Kovind tweeted that Ram Katha was popular not only in India but across the globe. “There are many readable forms of Ram Katha, including Ramcharitmanas of Goswami Tulsidas in north India, Krittivas Ramayana in the eastern part of India, Kamban Ramayana in the south,” he added.

Governor Anandiben Patel said Ayodhya was known across the world as the land of religion and culture. She added, “On the cultural map of India, Ayodhya is the only city from where people believing in different sects of religion and faith have been present.”