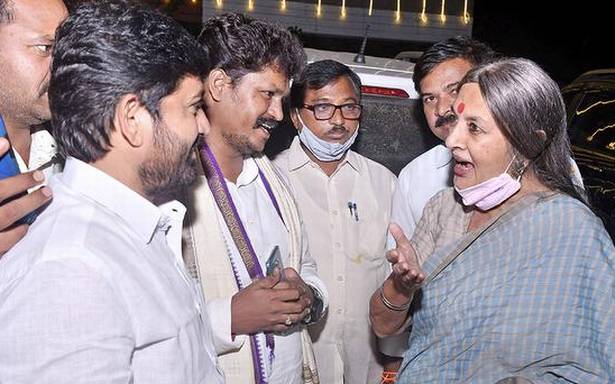 CPI (M) Polit Bureau member Brinda Karat has demanded that the TRS government withdraw the “false cases” filed against hundreds of tribal men and women in the State for exercising their rights under the Forest Rights Act, 2006, and give them compensation for “lodging” them in jails and “subjecting” them to severe injustices.

She was addressing a gathering of tribals after inaugurating memorials in honour of the CPI (M) former MLAs from Bhadrachalam late Kunja Bojji and Sunnam Rajaiah in the temple town on Thursday. Earlier, she participated in a huge rally taken out by Adivasis in the tribal heartland of Bhadrachalam. CPI (M) State secretary Tammineni Veerabhadram and others took part in the rally.

She paid glowing tributes to the late tribal legislators who led a simple life and served selflessly to defend the rights of marginalised sections and voiceless masses till their last breath.

Addressing the tribal people from various parts of Bhadrachalam Agency, Ms Karat said the TRS government under pressure from the relentless movements organised by the CPI (M) and other Left parties, various other Opposition parties including Adivasis themselves issued a circular to give pattas for podu cultivators.

The CPI (M) State committee spearheaded a concerted struggle against the BJP-led Central government’s policy to destroy the hard-won Scheduled Tribes and Other Traditional Forest Dwellers (Recognition of Forest Rights) Act, 2006, and the TRS government’s attempts to sabotage the Act by denying the podu farmers the rights guaranteed under the RoFR Act, she said.

Under the RoFR Act every Adivasi and every traditional forest dweller had the right to the land in their occupation. Podu cultivation is a customary practice which is recognised by the law, she noted, adding: “Who is this government which filed so many false cases and sent scores of Adivasis to jails because they exercised their rights under the Act.”

The Narendra Modi government launched a huge assault on basic rights of people of the country and thrust unbearable burden on common man in the form of skyrocketing prices of petrol, diesel and LPG, she charged, alleging that the BJP dispensation at the Centre was allowing corporate loot and burdening common people.

On November 26, the historical struggle of farmers against the Centre’s three farm laws will complete one year and to mark the anniversary solidarity programmes will be held across the country to press for the scrapping of the three farm laws, Ms Karat said.

Terming both Bojji and Rajaiah champions of downtrodden and underprivileged sections, she called upon all to work together towards fulfilling their ideals under the red flag.