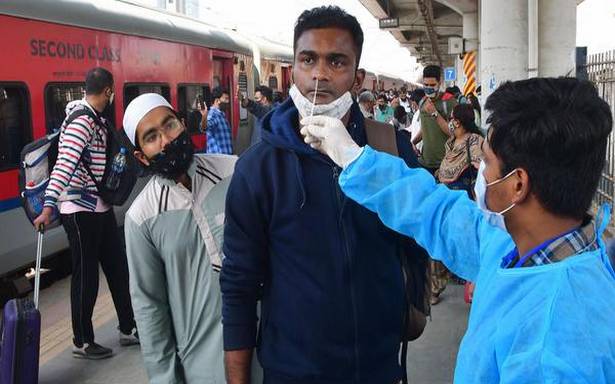 Mumbai reports more than 8,000 new cases of whom more than 90% are asymptomatic

Maharashtra’s case surge continued unabated as it recorded 12,160 COVID-19 cases on Monday while the active case tally breached the 50,000-mark to reach 52,422.

The State has witnessed a five-fold jump in the cases in a week, with its active tally standing a little over 10,400 on December 7.

However, a majority of the cases were either asymptomatic or mild in nature, said authorities.

Mumbai recorded 8,082 cases — the highest of the new infections of whom 90% (7,273 cases) were asymptomatic, said the authorities.

The cumulative toll touched 1,41,553 with 11 fatalities reported across the State. Only 1,748 recoveries had been reported in the last 24 hours.

On Monday, 68 Omicron infections were reported — 40 from Mumbai city and 17 from Pune district. This takes the Omicron tally to 578 of whom 259 have been discharged so far.