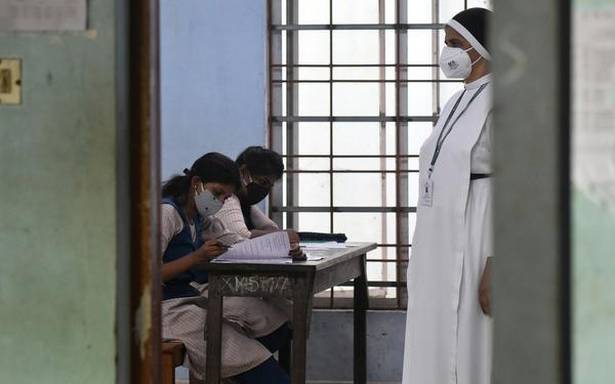 Aron Selestin is disappointed that he would not be appearing for the Class 12 CBSE boards this year, but also understands how health has been prioritised in the decision to cancel the examinations.

A Class 12 Science student at Kendriya Vidyalaya, Akkulam, Aron says he cannot imagine contracting the infection and having to miss the rest of the examinations. As he is preparing for the Joint Entrance Examination (JEE), he thinks the effort put in gearing up for the boards would stand him in good stead there.

Not everyone though shares his sentiments, and it is perfectly understandable, says Aron. “Many students feel that as they did not have a conventional academic year, conventional examinations too do not make sense.”

While respecting the government’s decision, Selestin K. Thomas, Aron’s father, fears the right assessment may not be followed if the marks of Class 11 or Class 9 are considered. Students put their maximum efforts in Class 12, appearing for multiple pre-boards and so on, but they may not get the deserved recognition for it, he says.

He is also apprehensive that as students embark on their careers in future, the perception may be that the marks they received were not deserved. A scaled-down version of the examinations could have been considered, he says.

Amal Krishna, a Class 12 Humanities student at Sarvodaya Vidyalaya, says students’ worry about the examinations has ended, but the criteria for their assessment is not yet out. “The board examinations are seen as a stepping stone to higher studies, and an alternative assessment strategy that takes into account marks in Class 11 or Class 9 may not do justice to the hard work they put in throughout this academic year.”

Amal points out that many students do not do their best in Classes 9 or 11. Some others may not do well in assessments and school-level examinations even in Class 12, reserving all their efforts for the boards. Such students may find themselves at a disadvantage.

This is also the perfect time to think of assessments that are not based on students cramming the textbook and notes and regurgitating them in examinations.

School authorities say the cancellation of board examinations has evoked a mixed response, as students performing well in school wanted to appear for the examinations, and others not so much. Many feel that inclusion of Class 9 and 11 grades in the assessment would drive down their marks.

They also worry that CBSE students may find it more difficult to get their due in the State entrance examinations with the board examinations being cancelled.

The impact of the cancellation of the examinations on the prospects of students looking to go abroad for higher studies is unclear too. “Students undergo a rigorous scrutiny but we are not sure what value would be placed on marks obtained through alternative assessments,” a school Principal said.

06/02/2021 India Comments Off on With CBSE Board exams cancelled, students now worried over assessment method
India