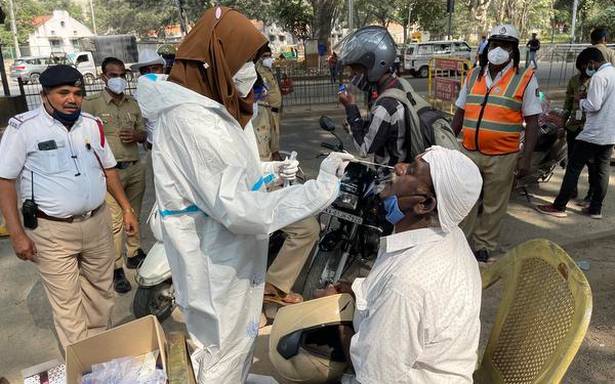 Average contacts traced per patient is reduced by half over a week; Health Department is increasing the number of field staff for the process

However, K.V. Trilok Chandra, BBMP Special Commissioner (Health), claimed that contact tracing is being done aggressively in Bengaluru. “There could be a data lag due to which the number of contacts traced per patient is low in Bengaluru. The week-on-week testing has dramatically increased in Bengaluru and most of the people tested are contacts,” he said.

D. Randeep, State Health Commissioner, said while the average number of contacts per patient may be low, the total number of contacts traced is more owing to the sheer number of positive cases. “Now our focus is on tracing and testing primary contacts as the transmission of Omicron variant is high and the core family is usually infected. Besides, several primary contacts are coming on their own and getting tested. Among the secondary contacts, we are testing only those who are symptomatic,” he said.

Admitting that tracing 20 contacts per patient, which is the ideal number, will not be possible now, the Commissioner said the department was working on increasing the number of field staff for contact tracing. “As of now, health teams from the BBMP and Home Guards are involved in the exercise in Bengaluru. We are planning to deploy staff from the Education Department as schools are closed now. We have also written to the Education Department in this regard,” he said.

Asserting the importance of contact tracing, C.N. Manjunath, nodal officer for labs and testing in the State’s COVID-19 task force, said it was vital to break the transmission chain. “Identifying the contacts and the vulnerable population, including those with comorbidities, ILI, and SARI, is what is needed at this juncture when the virus is spreading extensively,” he said.

Pointing out that the manpower required for this important exercise should be doubled, the doctor said contact tracing was very difficult at this stage of the pandemic.

During the first wave, Karnataka had won appreciation from the Centre for its robust contact tracing efforts in the initial few months when an average of 47 contacts per patient were being traced.

01/09/2022 India Comments Off on With a surge in cases, contact tracing becomes a difficult exercise
India