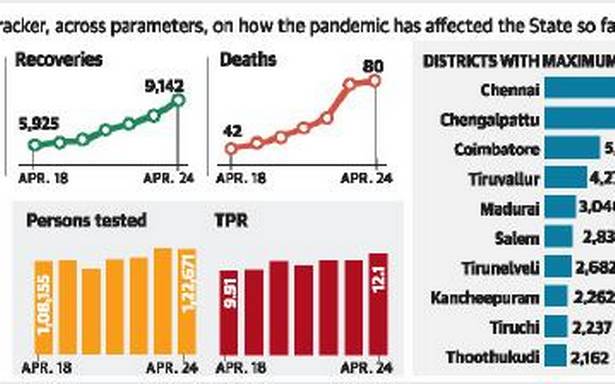 The number of active COVID-19 cases in Tamil Nadu breached the one lakh-mark on Saturday, with 14,842 more people testing positive in the State. As many as 1,00,668 people are currently under treatment.

Among those newly diagnosed with COVID-19 were returnees from other States — while one person from Delhi tested positive at the airport, as many as 42 persons who arrived by road also tested positive. They include 18 persons from West Bengal, 10 from Bihar, three each from Andhra Pradesh, Karnataka and Assam, two passengers each from Kerala and Chhattisgarh, and a passenger each from Delhi, Uttar Pradesh and Telangana.

Eighty more persons succumbed to the infection. Of the deceased, 41 persons died in private hospitals and 39 in government facilities, taking the toll to 13,475.

Neighbouring Chengalpattu, with 1,163 cases, and Coimbatore, with 1,004 infections, were among those with the highest number of cases. Chengalpattu and Tiruvallur recorded seven deaths each. Kancheepuram recorded 454 cases and four fatalities. Perambalur saw 19 infections and Ariyalur 33.

Thirteen persons with no co-morbidities were among the deceased.

The youngest among those who died was a 32-year-old woman from Coimbatore with hypothoridism. She was admitted on April 22 to the government medical college hospital there. She died around 12 hours after admission. An RT-PCR test revealed that she had the infection. Doctors said she died of respiratory failure caused by bilateral broncho pneumonia.

An 83-year-old woman from Tiruchi, who tested positive for the infection on April 16 and was admitted to a private hospital, was the oldest among the deceased. She was diabetic and had hyperlipidimia. She was admitted with complaints of fever, cough and difficulty in breathing. She died on Friday due to acute respiratory distress syndrome, owing to COVID-19 pneumonia.

The State has so far conducted almost two lakh vaccination sessions and inoculated 52.51 lakh people against COVID-19. A total of 3,693 sessions were held to administer Covishield and 537 to provide Covaxin.