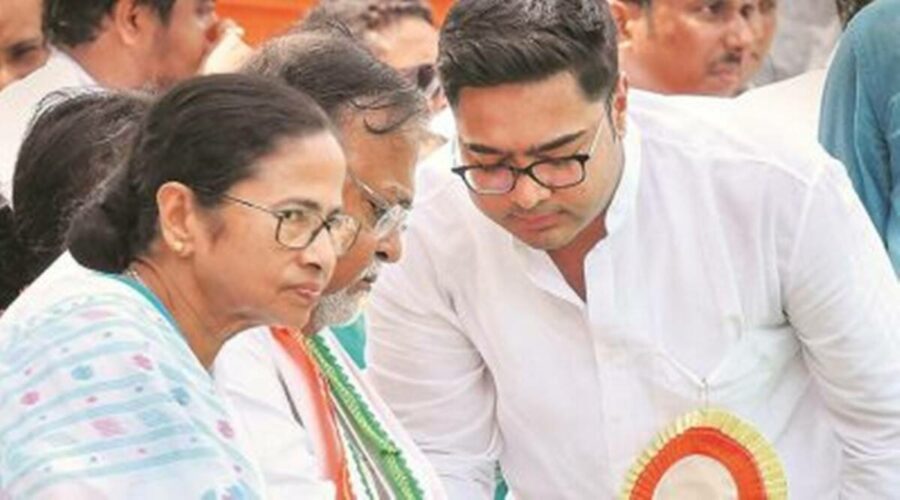 Banerjee said he will publicly hang himself if the corruption charges levelled against him are proved to be true. In a direct challenge to his detractors in the BJP, TMC MP and West Bengal Chief Minister Mamata Banerjee’s nephew Abhishek Banerjee on Sunday said he will quit politics if the Centre brings a law allowing only one member of a family in politics.

Banerjee said he will publicly hang himself if the corruption charges levelled against him are proved to be true.

The Diamond Harbour MP, while addressing a rally in Kultali assembly constituency, said Prime Minister Narendra Modi should table a bill banning more than one member of a family from active politics and the next moment, Banerjee will no longer be in the political arena.

“From Kailash Vijayvargiya to Suvendu Adhikari, Mukul Roy to Rajnath Singh, there are other members of your families
who occupy important posts in the BJP. If you ensure that there will be only one family member in active politics, there will be only Mamata Banerjee from our family in the TMC from the next moment. I promise that,” he said.

Taking exception to BJP leaders calling him an “extortionist”, Banerjee challenged them to prove their allegations and said he will publicly hang himself if the charges against him are proved to be true.

Referring to the Victoria Memorial incident during a programme on the occasion of the 125th birth anniversary of Netaji Subhas Chandra Bose on Saturday, he said ‘Jai Shri Ram’ slogans were deliberately raised to prevent Chief Minister Mamata Banerjee from delivering her speech.

The chief minister had refused to deliver her speech after the slogans were raised in the presence of the prime minister, saying she felt insulted. “We are proud that Mamata Banerjee made it clear that if Netaji is insulted by such slogans during a government function, we will rise in protest. Bengal will rise in protest,” the TMC MP said.

“You can chant Jai Shri Ram thousand times, but at temples, at religious functions, at your place but not in this fashion at a government programme to commemorate an icon like Netaji,” he said.

By not allowing her to make her speech in such a programme, they also insulted the people who elected her to the assembly. This reminded people of the vandalism of the Ishwar Chandra Vidyasagar bust in 2019, he said. Coming down heavily on BJP leader Sovan Chatterjee, the TMC leader said, “After waking up from hibernation after three years, he is now making a false claim that he was instrumental in my victory in Diamond Harbour in 2014. He should know what people in the area think about him.”

Without naming Chatterjee, a TMC turncoat who joined the BJP in 2019, Banerjee challenged him to contest any of the
31 seats in South 24 Parganas district. On Banerjee’s comments on dynasty politics, state BJP chief Dilip Ghosh said that the TMC MP had never raised such demands earlier and is making such statements now as the party is faced with imminent defeat in the assembly elections due in April-May.

01/24/2021 India Comments Off on Will quit if Centre brings law allowing only one member of family in politics: Mamata’s nephew
TV & Movies