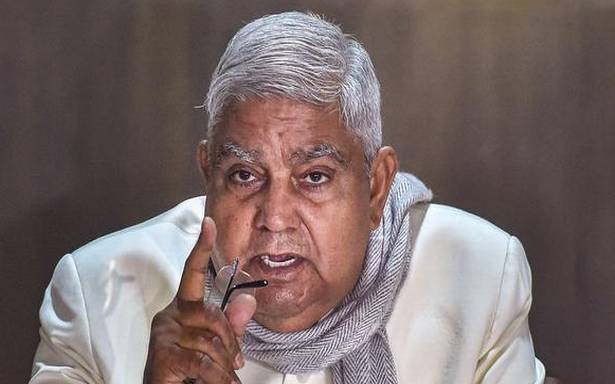 Assembly elections in West Bengal are likely to be held in April-May.

West Bengal Governor Jagdeep Dhankhar said on Sunday that he would do everything possible to ensure state elections are held peacefully.

In a democracy, people must have the right to vote without fear, the Governor told reporters at Joka, on the southern fringes of the city, where he had gone to offer prayers at Swaminarayan temple.

“I will do whatever is needed to facilitate peaceful and fair polls in the state. I am giving my word as the Governor,” Mr. Dhankhar said.

Bengal should be able to set an example before the entire world by conducting free and fair polls, and the administration should work without bias to make that happen, he asserted.

“It’s high time that the image the state has projected, with violence and clashes breaking out during polls, should be changed. The police and the administration should work towards that objective in a neutral manner,” the Governor added.

Mr. Dhankhar had on several occasions voiced concern over the “growing violence” in the State and urged the State administration to act above political considerations.

Taking to Twitter, he wrote, “Prayed for peace, harmony and love for people of the State at Shri Swaminarayan Mandir Joka at 11.30 am.” State minister Partha Chatterjee, in response to Mr. Dhankhar’s assertions, said polls had largely been peaceful in West Bengal.

“The governor, by saying all that he did, is acting in a partisan manner,” he said.

Assembly elections in West Bengal are likely to be held in April-May.

12/27/2020 India Comments Off on Will do everything needed to facilitate free, fair polls, says WB Governor Jagdeep Dhankar
TV & Movies