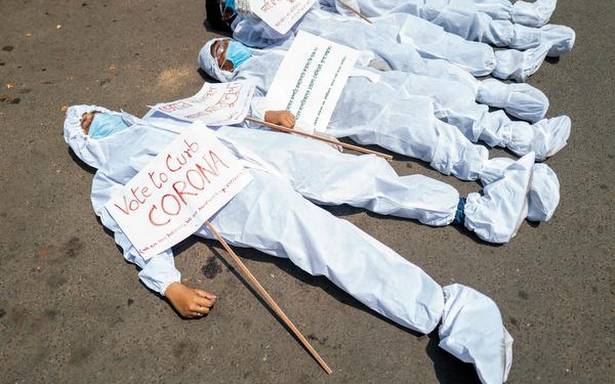 She alleges the EC’s ‘intentional omission’ led to the death of her husband, TMC candidate Kajal Sinha, of COVID-19

In a first, the widow of Trinamool Congress (TMC) candidate Kajal Sinha, who recently died of COVID-19, has filed a case of culpable homicide against Sudip Jain, Deputy Election Commissioner In-Charge of West Bengal, accusing the Election Commission of India (EC) of “deliberate and intentional omission” leading to her husband’s death.

Sinha was the TMC candidate from the Khardaha Assembly constituency, which went to polls in the 6th phase of the ongoing West Bengal Assembly election on April 22. He died three days after voting for his seat was held on April 25.

Other than Mr. Sinha, three other candidates died during the prolonged election campaign in the State. Two candidates were from the Jangipur constituency — the Revolutionary Socialist Party’s Pradip Nandi and Congress’ Rezaul Haque. Samir Ghosh, independent candidate from Baisnabnagar Assembly constituency, also succumbed to COVID-19.

In her complaint, Nandita Sinha said that the EC had shown “complete unpreparedness, negligence, lack of accountability and utmost disregard towards the lives of the common people”.

West Bengal alone, she said, has 95,000 COVID-19 cases and the EC had decided to carry out elections over eight phases spanning over 33 days despite the already precarious situation in the rest of the country.

“It has malignantly chosen to continue with eight phases of polls despite having reason to believe that the infection would spread at an alarming rate causing widespread death across West Bengal and the nation,” she said.

She also accused the EC of “intentionally” not taking any steps to ensure COVID-19 protocols were followed at public rallies.

She pointed out that on April 16, days before her husband contracted COVID-19, the TMC had written to the ECI, warning the election body about the massive flare-up in COVID-19 cases, and requested the EC to club the remaining three (6th, 7th and 8th) phases of the polls.

The EC, she said, “frivolously applied its illusory and cosmetic safeguards” in the form of prohibition of campaign after 7 p.m., and extended the silent period of no campaigning prior to polling from 24 hours to 72 hours.

The TMC wrote again to the EC on April 22 to say that these provisions were not enough to control the situation, reiterating their demand to club the remaining phases. “Despite continuous alarms raised by the Hon’ble High Court at Calcutta, TMC and other stakeholders including the media, the ECI has deliberately ignored all evidences of the impending catastrophe, turned a blind eye towards ensuring compliance of COVID related protocols and chosen to continue with its elaborate eight phased polls in the state of West Bengal resulting in the deaths of hundreds of people including my husband,” Ms. Sinha said in her complaint.