The BJP hopes that any vote AAP gets should only be from the Congress.
At the same time, it does not want AAP to get too much of it.
Because, a declining old opponent is a blessing as much as a rising new rival is a threat, points out Shekhar Gupta.

What does it tell us about the state of our national politics when the election battle in Gujarat seems the most underwhelming in two decades, beginning with Narendra Modi’s first in 2002?

This, in spite of the fact that there is an exciting new player in the field now in the Aam Aadmi Party.

Some possibilities would look obvious. That people, especially those who believe they are the wisest, by and large feel that they know the result.

That the Bharatiya Janata Party will win easily, especially as the Opposition vote is divided between the traditional challenger Congress and the AAP, so what’s the story?

The indifference of the Congress could probably be explained by the party deciding to save its ammunition for bigger battles rather than expend it in Gujarat where the odds might be stacked much too heavily against it.

And the BJP, which never takes any poll campaign lightly, is campaigning hard as usual.

We don’t see the sense of desperation that was on display in 2017 when at one point the Congress was running them really close.

The BJP’s larger effort is concentrated on cutting the AAP at the roots before it grows too far.

The BJP now genuinely believes that the Congress’s decade-long decline has gathered so much momentum that it can no longer be its pre-eminent threat.

Even if the Congress disappears, as it has done in, say Delhi, Odisha and West Bengal, what used to be the loyal Congress vote does not come to the BJP.

It always looks for another address. It can be Mamata’s TMC, Naveen Patnaik’s BJD or, Arvind Kejriwal’s AAP, as in Delhi and Punjab.

What if the AAP picks up anything upwards of, say, 15 per cent of the vote in Gujarat?

So far, the Congress has been consistently losing to the BJP in Gujarat for almost three decades, but its vote share has been stable and sizeable — upwards of 30 per cent — even in total wipeouts, as was the case in the two Lok Sabha elections of 2014 and 2019 when Modi swept all the seats in the state.

That, with the party’s leadership distracted, with Rahul’s padyatra making a point of not straying into campaign territory, can be vulnerable.

The BJP therefore finds itself in a paradoxical situation.

It hopes that any vote the AAP gets should only be from the Congress.

At the same time, it does not want the AAP to get too much of it. Because, a declining old opponent is a blessing as much as a rising new rival is a threat.

Even the BJP people acknowledge that the election in 2017 was the closest Rahul Gandhi’s Congress came to breaking its momentum.

It wasn’t touch and go, but close enough until a week before the polling dates to give the Modi juggernaut a fright.

It showed in Modi’s emotional address to his party after the victory. That tension is missing today. 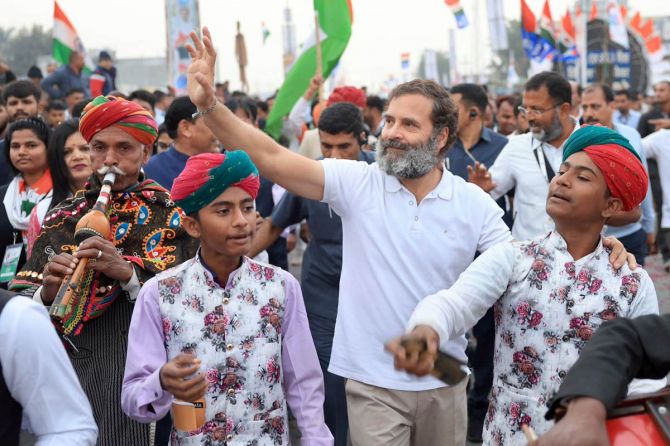 It is the relative lack of urgency on the part of the Congress which is intriguing.

The answer you get depends on who in the Congress you are speaking to.

There are some brave ones who’d insist that the anti-incumbency in both Himachal and Gujarat is so strong that the BJP will be defeated without too much effort from them. Himachal in particular.

There are also those closest to Rahul who argue, see, he is realistic and wise. He has figured that it works better for the BJP if an electoral contest is cast as Modi versus Rahul.

So, for now, Rahul has pulled himself out of the way. It is a tactical repositioning.

It doesn’t mean, however, that the party has lost its fighting spirit or ambition.

It is just choosing better tactics, strengthening itself for the bigger battles in the future.

Those with a closer understanding of the party’s mind would argue that instead of fighting Modi piecemeal and losing, Rahul is building a larger challenge with clear ideological binaries for 2024.

A recent article by Shruti Kapila, professor at Cambridge University, argues that Rahul’s Savarkar remark is not about the present, but about setting up the terms of the contest in 2024.

This may sound cool from the Rahul camp, but the cycle of politics is brutal. It does not give you a pause, an intermission, to lick your wounds. There is no strategic timeout.

And when your rivals are practitioners of ‘total politics’, like Modi and Kejriwal, a pause will be seen as an acceptance of defeat.

Nobody can take a gap year now with the hope of a big comeback in the summer of 2024.

The two state elections taking place now are where the fight has always been between the Congress and the BJP.

In one now, the AAP is muscling in, mostly eyeing the Congress vote.

This also sets in a 13-month cycle wherein state after state, the Congress and BJP will directly come up against each other. Karnataka will be the next.

And while in Telangana, the Congress has already lost its position as the challenger to KCR to a surging BJP, later in the year in Rajasthan, Chhattisgarh and Madhya Pradesh it will be in a straight contest with the BJP.

The first two of these are also the only states the party rules by itself (not in a coalition as in Jharkhand). It has much to lose here. 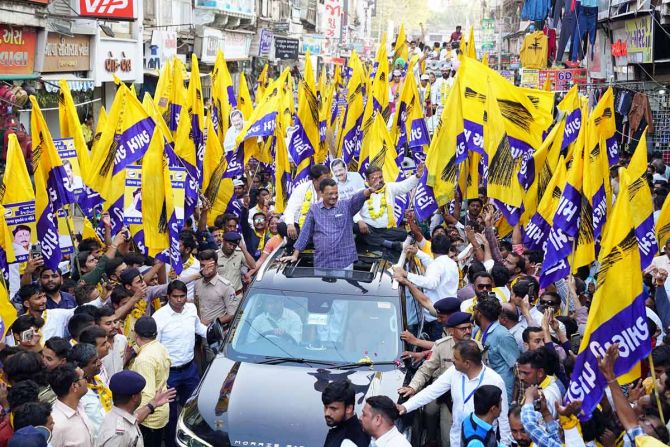 Political learning of two decades tells us that these three heartland state elections are no real markers for what might happen in the general elections that follow about six months later.

Atal Bihari Vajpayee’s BJP swept these in 2003, concluding that India was shining and waiting to give it a fresh, bigger mandate. It advanced national elections and lost famously.

In 2018, the Congress won all three (it also secured Madhya Pradesh initially), but was wiped out in the same states in the subsequent national elections.

The BJP knows it can ride another setback here because the general election will be fought entirely in Modi’s name, for his third term.

For the Congress, the consequences of losing any of these states will be the worst possible build-up for 2024.

How will it keep the enthusiasm and loyalty of its cadres? Where will the resources come from?

The reason this column contains so many question marks is because there are many transitions taking place simultaneously in our politics now.

There are tactical needs, strategic makeovers and repositioning.

National politics will gather a fresh impetus in the first half of 2023 as Karnataka goes to the polls.

For the Congress now, Karnataka offers a better opportunity than Gujarat.

The BJP government there has been shambolic, is riven by infighting, Modi and Amit Shah do not come from there.

I’d rather not buy the Rahul camp idea that he’s holding his fire until the general elections.

It is more likely that his party believes that Karnataka offers them their best chance of winning a Gujarat-sized state if Gujarat itself is too challenging.

That win — if it comes — might also be a good time for yet another relaunch of Brand Rahul. He has not had a trophy in his cupboard since the winter of 2018.

By special arrangement with The Print

This column was written before the election results came in.