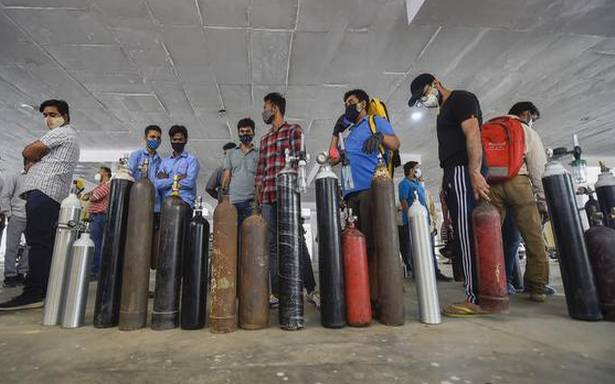 M.P., Maharashtra got more than request amount, but capital got reduced quantum

The Delhi High Court on Thursday questioned the Central government why States such as Madhya Pradesh and Maharashtra were allotted more oxygen than they had asked for, while Delhi was not even allotted its projected requirement to treat COVID-19 patients.

“We are not asking you (Centre) to stop giving to these States. But the point is, on April 20, Delhi’s projected demand was 700 metric tonne, but you allocated 480 metric tonne. It doesn’t appear to be falling in line,” a bench of Justice Vipin Sanghi and Justice Rekha Palli said.

The bench’s query came after senior advocate Rajshekhar Rao, who was appointed as amicus curiae to assist the court in the case, said that on April 20, Madhya Pradesh had projected a demand for 445 metric tonne, but the allocation was 543 metric tonne.

Solicitor General Tushar Mehta said Madhya Pradesh had a surge in demand due to rise in demand from two districts. “90% of our time goes into fire fighting the situation in Delhi. Most of the tanker which have been imported will go to Delhi,” Mr Mehta said.

“Delhi government did demand 700MT. The allocation is 490MT. The actual quantity coming to Delhi is about 335-340MT, which according to our assessment is sufficient,” the Solicitor General said.

“So far as oxygen is concerned, no resource is limited. We are aware as to the situation of pandemic right now…This is an ever changing situation. Let there not be a panic,” Mr Mehta said.

“Panic is not because that what I say or what Justice palli says. Panic is on ground. Because of lack of resources, oxygen, medicines, beds… People who are close to us are not getting beds. We are hearing it everyday,” Justice Sanghi responded.

“Today the position is hospitals have stopped admission. Because they don’t have oxygen. People are suffering,” the High Court remarked.

Senior advocate Rahul Mehra, representing the Delhi government, informed the court that there 16,072 non-ICU beds in large hospitals in Delhi. By applying the formula worked out by the Central government, the requirement of oxygen is 304 metric tonne.

In other small hospitals and nursing homes, the requirement is 150 metric tonne. Mr. Mehra also stated that the pandemic in Delhi may peak around May 15 and the Delhi government is making arrangement for another 15,000 non-ICU beds that will require additional oxygen allocation.

As of today, there are 4,866 ICU beds, which will further be augmented by another 1,200 ICU beds by May 10. The existing requirement of oxygen is 704 metric tonne. After the augmentation of the additional bed capacity the demand for oxygen for Delhi will be 976 metric tonne, Mr. Mehra said.

At this, Solicitor General Mehta said, “Let’s not allow this to be made political.”

The High Court asked the Centre to respond to the issue.