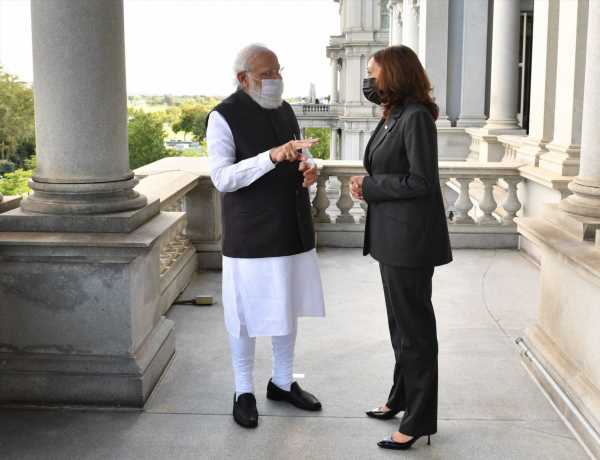 India’s most powerful prime minister in five decades gets publicly admonished — if gently — by the US vice-president.
The question is, would this make him reflect on how and why, or which ones of his government and party’s missteps exposed his flank like this? asks Shekhar Gupta.

It is easy to explain why India has always mattered, and does even more so in the 21st century.

The prime minister has himself explained why India is an irresistible magnet for the world.

In his typically alliterative phraseology, he keeps listing the three ‘Ds’: Demography, Democracy, and Demand.

Once the global charm of India has been so pithily stated by Narendra Modi, there isn’t much a columnist can do.

Because, if your point is just that one catch-phrase, it is impossible to provoke a debate.

That’s why we must ask what’s it that makes India matter more, or less at a time when its global engagement, especially on the strategic side, is the strongest and the most decisive ever? Ever, we said, with the qualification of the Treaty of Peace, Friendship and Cooperation with the Soviet Union in 1971.

India spent a decade in a relative global power vacuum, or out of sight, out of mind after the Soviet collapse.

And then the rebuilding started.

Four prime ministers built on it: P V Narasimha Rao, despite his lack of majority; Atal Bihari Vajpayee in a difficult coalition that saw three lives, from 17 days to 13 months to about four-and-a-half years, respectively; Manmohan Singh, despite leading a coalition surviving on Left support, and Narendra Modi, now with a second full majority.

I am conscious that any reference to Nehru these days is found ‘triggering’ by many.

But, if I steal his ‘tryst with destiny’ line, it would be safe to say that while Rao made a new tryst with a new strategic destiny for India, the time has come to redeem it, even if ‘not wholly or in full measure’, but at least substantively.

This is Mr Modi’s opportunity.

The question is, is his India ready? And that’s why we asked first up, does India matter?

Which brings us back to the three determinants of India’s appeal the prime minister often lists, the three ‘Ds’.

At this point, when he holds strategically his most important meetings since his re-election in 2019, there is a varying degree of trouble on all three.

The demographics are a challenge now, because of steeply rising unemployment and its dividend could indeed become a deficit instead if it is not reversed fast.

That demand is struggling in our economy is something even the government wouldn’t deny.

We can blame the pandemic for these and the world will wait.

It is the third, democracy, where Mr Modi’s India faces the sharpest challenge and questioning now.

And it is almost entirely of the making of the Modi government and his party’s politics.

Google and replay the statements that Mr Modi and US Vice-President Kamala Harris issued while speaking to the media before they began their meeting.

It was all diplomatic niceties and compliments, but a couple of paragraphs in Ms Harris’s short statement stood out.

For example, she said that as democracies around the world were under threat, ‘it is imperative that we defend democratic principles and institutions within our respective countries …’

Oops, was it the US V-P giving sermons to India’s prime minister, who’s not her equal in protocol terms?

She left no ambiguity: ‘I know from personal experience and from my family of the commitment of the Indian people to democracy … and the work that needs to be done (so) we can begin to imagine, and then eventually achieve, our vision for democratic principles and institutions.’

That this is a sharp shift from the Trump era is clear enough.

We know that Democrats have a stronger view on such issues than the Republicans.

Even Barack Obama in a public speech at the end of his January 2015 visit had delivered some ‘advice’ on religious freedoms.

That was, however, after the formal part of the visit was over and definitely not said in the presence of Mr Modi.

If Mr Modi was taken aback, he’s too sharp to show on camera.

Was he forewarned, we don’t know yet.

How much of it came up at their closed-door meeting that followed we might get an idea over the next couple of days, especially as The New York Times, Washington Post, Politico, the usual suspects pick up the leaks.

Ms Harris delivered her message dripping in maple syrup, but this is the first time Mr Modi has had to hear this from a foreign interlocutor in public.

That he quietly took it on the chin and moved on without wincing is admirable diplomatic craft.

The question is, would this make him reflect on how and why, or which ones of his government and party’s missteps exposed his flank like this? 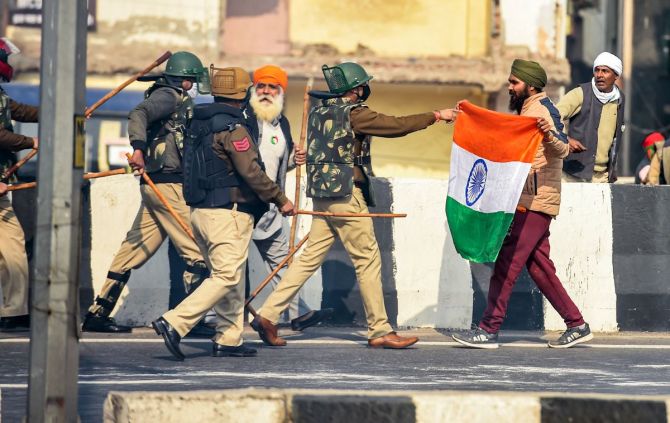 From Trump-Pence to Biden-Harris, there are ways in which America has changed, and hasn’t.

The larger strategic vision, threat perception, definition of allies is the same as before.

If anything, the Biden administration has been more forthright talking on the challenge from China.

And substantively, not just vainly tweeting about it.

Its quick move to seal AUKUS, a purely and unabashedly China-centric military treaty, is evidence.

Where it differs is in its view of democratic practice and treatment of minorities, especially the Muslims.

Let’s put it this way. All leadership responds to its political needs.

Mr Trump couldn’t care less about the Muslims also because they didn’t vote for him and wouldn’t.

Biden-Harris do, because they do vote for them and they want them to continue doing so.

Just as big nations act primarily in self-interest, so do their politicians.

And if the two coincide, so much the better for them.

Simply put, this is that moment of truth when Mr Modi has to reflect on his domestic, electoral politics.

Is it running counter to India’s larger strategic interest? If there is one thing the Afghan debacle and its aftermath show us, it is that the world, especially that part of the world we are aligned with, has pivoted away from the Islamic terror.

China has left Islamic terrorism way behind as a global threat.

This is something American thinker Francis Fukuyama has been warning about for some time.

That the new global strategic threat is China, not Islamic terror.

That’s why nobody cares (sadly) what the Taliban do to fellow Afghans.

And ask why Mr Biden has still not bothered to call Imran Khan while Islamabad is humiliating itself with this ‘apply, apply, no-reply’ war dance? Because Pakistan doesn’t matter.

If Afghanistan can be left to its own fate, Pakistan has lost its strategic leverage.

It can celebrate that Kabul victory in strategic isolation, as a Chinese protectorate.

India, on the contrary, matters even more, and not at all because it’s an ally against pan-Islamic terror.

Because it is large, powerful, militarily robust and willing to measure up to China.

You can call Freedom House what you want, an American establishment lackey or worse.

But if it downgrades India to a ‘partly free democracy’, it damages that most important of the Indian Ds, democracy.

Then India’s most powerful prime minister in five decades also gets publicly admonished — if gently — by the US vice-president.

Mr Modi has a historic opportunity to lead his country into a new, more secure strategic space.

He can do it only as a full democracy.

He can grab it, or blow over his persistent domestic temptations.

By Special Arrangement with The Print