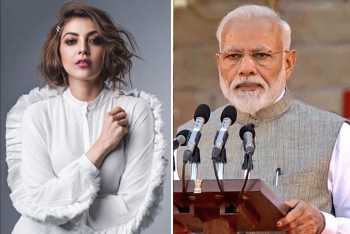 Several renowned celebrities from entire nation were invited for Prime Minister Narendra Modi’s swearing-in ceremony on Thursday. The grand political event is going to be graced by heads of foreign countries, Chief Ministers, film and sports celebrities of India.

Popular South Actress Kajal Aggarwal also was among list of celebrities who received invitation from Prime Minister’s Office. She had to miss the event due to late arrival of invitation. However, the charming beauty thanked Prime Minister Office and Rashtrapati Bhavan for the invitation. She also wished Modi for a glorious second term.

She took to her Twitter page and posted saying: “Dear sir @narendramodi @PMOIndia @rashtrapatibhvn thank you so much for your kind invite. Feeling privileged and honoured upon receiving this, would have loved to witness history in the making! Since my invite arrived late, couldn’t make it to Delhi in time. Feeling terribly bad about it. More power to you for a glorious term.”

Earlier in the day, Telangana and AP Chief Ministers KCR and Jagan Mohan Reddy had to cancel their Delhi trip as they failed to alert the Civil Aviation department in time. Considering that several international guests are expected in New Delhi, Civil Aviation officials couldn’t accommodate a slot for their arrival.