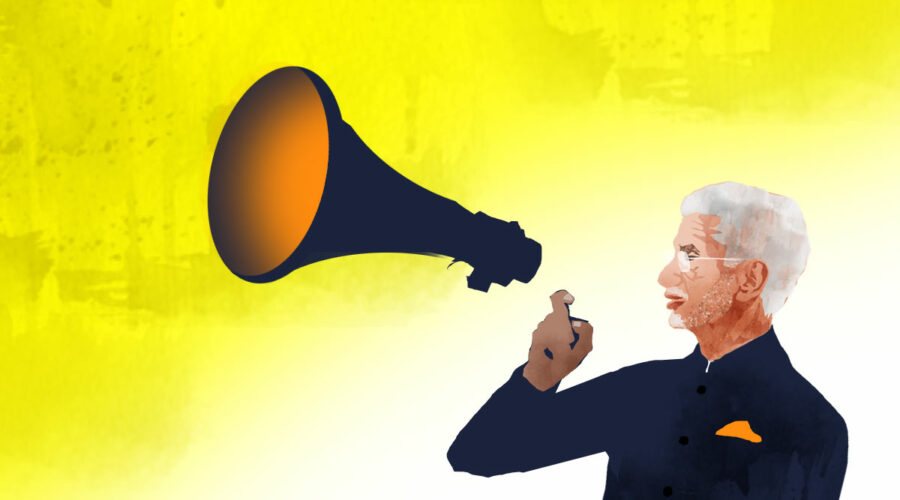 It is no secret that the reason why he decided to show Indians as they are to the world is the criticism which India has been facing on various counts, such as its human rights record, argues Amulya Ganguli.

By assuming the onerous task of defining ‘who we are’ to tell the world about India’s distinctive identity, External Affairs Minister Subrahmanyan Jaishankar has entered a minefield from which he may not find it easy to emerge unscathed.

For a start, he will have to explain why ‘we’, or at least one of us, notably a Delhi-based leader of the Bharatiya Janata Party wants all the names associated with Muslims in the Delhi region to be changed.

It’s a mammoth enterprise since he has identified about 40 villages which have Muslim names, underlining the country’s diverse demographic past when different religious communities lived cheek by jowl.

Since that kind of togetherness emphasiSed ‘who we were’, a wholesale alteration of names can be construed as an assault on history.

Moreover, the rationale for changes of this nature in order to emphasise ‘who we are’ at present points to a narrow-minded interpretation of demography which the world may not regard as legitimate since it is obviously guided by a dislike of Muslims.

From this standpoint, who we are at the moment is unlikely to show us in a favourable light.

The minister will have to do a lot of explaining, therefore, before international audiences to justify his position.

It is not only Muslims names which have come under the scanner.

Questions can also be asked as to why the Supreme Court, no less, had to intervene to ensure that the children of Lakshadwweep island can have non-vegetarian midday meals.

The judicial order is intended to set aside the diktat of the island’s administration to impose the Hindutva preference for vegetarianism on the children of the region although they are mostly Muslim who generally eat meat, eggs and fish.

Like the wiping out of Muslim names in the Delhi region to give the area a Hindu ambience, the unilateral tampering with the food habits in Lakshadweep by unelected officials emphasised the saffron dispensation’s intention to mould the islanders into being who they should be rather than continue to be who they are.

That the Muslims are the specific targets of the Hindutva lobby is evident from the comments of a saffron news channel against the ‘disease’ of Iftar parties organised by the army by arranging meals at the end of of the day-long fast observed by Muslims during the month of Ramzan.

It didn’t take long for the army to withdraw the tweet announcing the holding of an Iftar gathering.

Going by this incident, ‘we’ at present would appear to be a bunch of Islamophobes.

It is unclear whether Jaishankar wants to convey this particular image of the country to the outside world.

It is no secret that the reason why he decided to show Indians as they are to the world is the criticism which India has been facing on various counts, such as its human rights record.

In the minister’s apparent view, ‘we’ do not care what the rest of the international community thinks of us if only because ‘we’ do not want to be a ‘pale imitation’ of their way of life.

But it is open to question whether a garish presentation of the present-day identity of the Indians is the best way to deflect Western criticism.

Amulya Ganguli is a writer on current affairs.