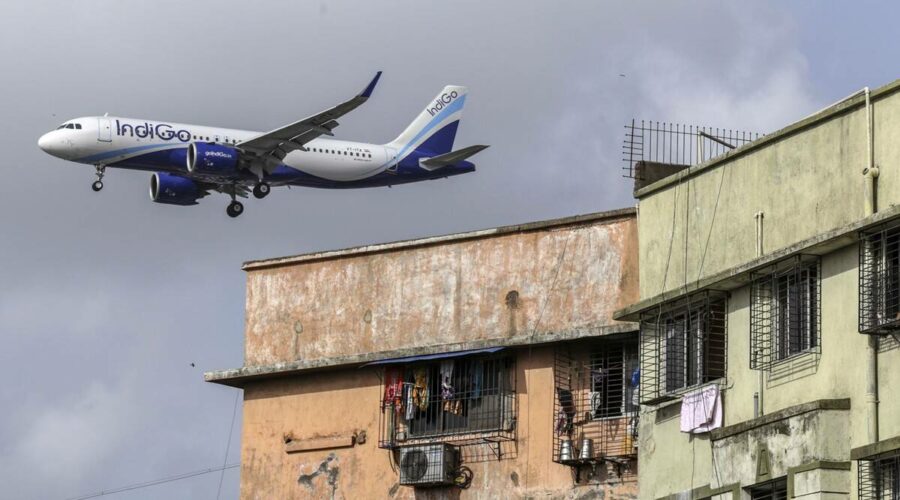 “It looks as though things will get worse for the Indian aviation industry before they get better,’’ said Rob Morris, the head of consultancy at UK aviation advisory firm Cirium. 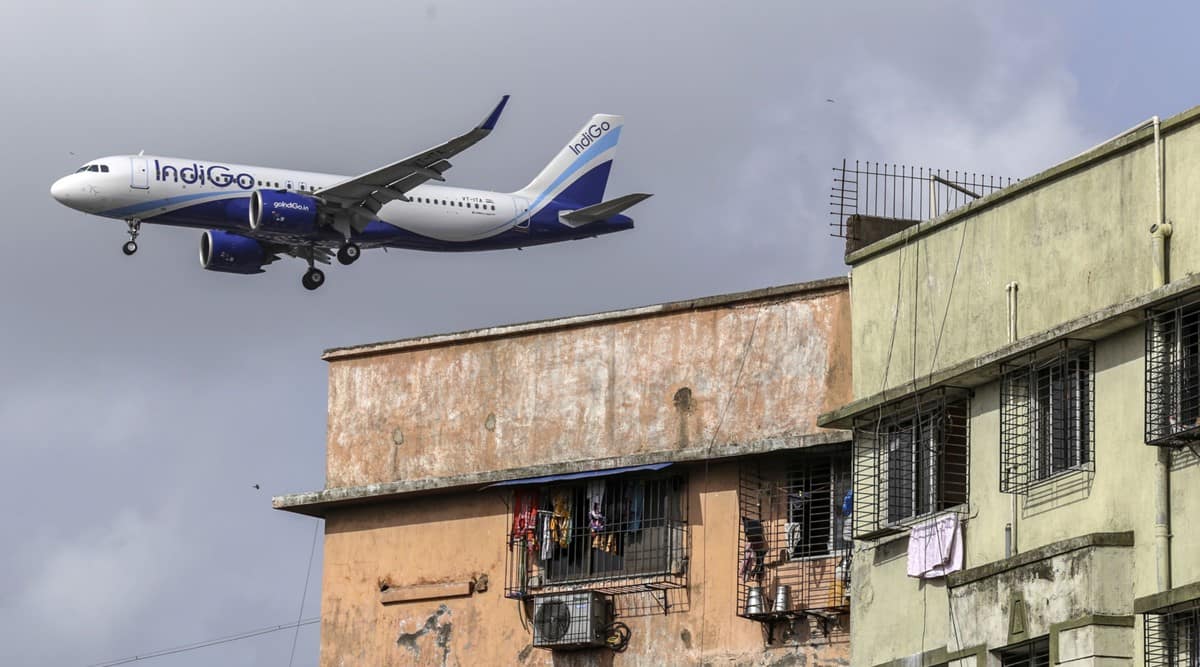 The ferocious surge in new coronavirus cases that has turned India into the global pandemic hotspot has also reversed one of the airline industry’s biggest travel comebacks.

Carriers in India had reached 87% of their pre-pandemic seat capacity through early April, based on a Bloomberg analysis of data from flight tracker OAG. That progress has now unraveled as the surge in infections led to a pullback in domestic flights, which make up the vast majority of the market.

As of the start of this week, capacity had fallen to 71% of 2019 levels, a 16 percentage-point drop over three weeks, the data show. Further eroding demand is a move by nations including Singapore, Australia, the UK and the United Arab Emirates to impose restrictions on visitors from India. 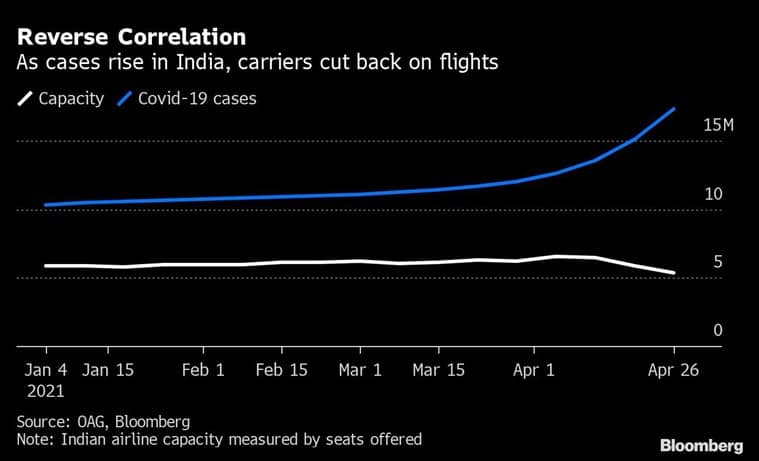 Using weekly OAG data, Bloomberg has built a flight tracker to monitor the pulse of the global air-travel comeback. The latest update shows continued progress in China, while plans to increase capacity in the US and Europe haven’t yet taken hold. With operators still canceling flights from India, the number of seats offered globally may have fallen slightly from last week.

India’s expansive domestic network made it one of the world’s fastest-growing countries for aviation before the recent Covid-19 outbreak. Short-haul carriers such as IndiGo propelled India to the world’s third-largest market. And earlier on in the pandemic, the South Asian country of 1.4 billion people won plaudits for enforcing strict social distancing rules that lowered the infection rate. But now the country’s public health system is being overwhelmed by an aggressive surge in cases, with daily infections exceeding 300,000. 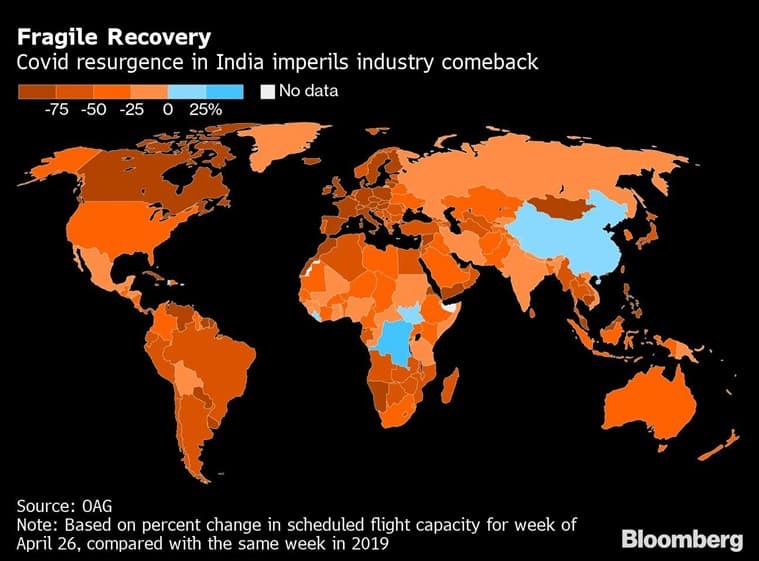 As the outbreak overwhelms the nation’s hospitals and crematoriums, an upturn in air travel won’t happen until the latest crisis is contained, said Rob Morris, the head of consultancy at UK aviation advisory firm Cirium.

“It looks as though things will get worse for the Indian aviation industry before they get better,’’ Morris said.

Among major economies, only Thailand and Turkey have seen even bigger setbacks, though neither had made it back as far as India. With airlines still cancelling flights and countries throwing up more barriers, India’s market could plummet to as little as 25% of normal, says John Grant, chief analyst at OAG.

Reacting to surging cases, Turkey imposed a three-week lockdown. Thailand, too, could be forced to tighten restrictions on businesses and travel as an outbreak that began from nightlife venues in Bangkok overwhelms hospitals and healthcare facilities. 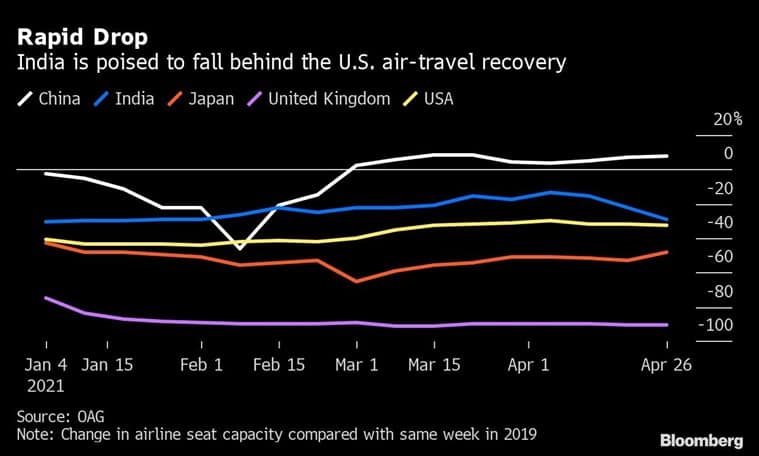 The reversal in India “highlights how fragile the recovery is and will be in the coming months as incidents like this occur elsewhere,’’ Grant said.

While the industry is going through volatile times, the comeback “has been very strong and it will be strong again,’’ Burcu Geris, chief financial officer of Istanbul-based airport operator TAV Havalimanlari Holding AS said in an interview with Bloomberg Television.

India’s troubles have already spilled over into connected markets. A blossoming trade in getaway flights to the Maldives has now faded. The same has happened with non-stop journeys that had been added by US carriers such as United Airlines Holdings Inc. and American Airlines Group Inc. earlier in the crisis.

“What’s happening in India is nothing short of a humanitarian crisis and we see that,’’ Larry Culp, chief executive officer of engine-maker General Electric Co., said Tuesday in an interview. “It’s our second-largest footprint for GE, so we’ve got unfortunately very good visibility on all of that.”

The US airlines have been using the flights to replace a fraction of the international business they’ve lost to the pandemic. At the start of the outbreak last year, India suspended regular international travel rules that would typically see many long-distance passengers routed through connecting hubs such as Doha and Dubai. 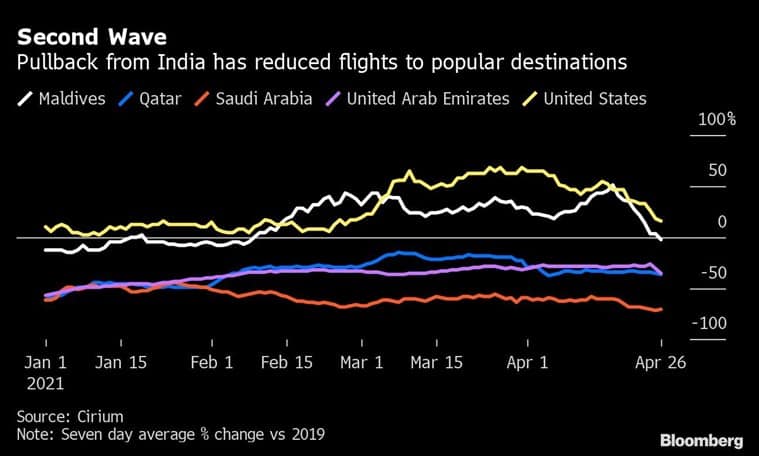 It’s not just US airlines that had hoped to claw back some international business with the help of India. The three big Persian Gulf carriers — Dubai-based Emirates, Abu Dhabi-based Etihad Airways and Qatar Airways in Doha — have wrestled for market share in India over the years.

But in the wake of the latest outbreaks, the UAE — home to Emirates and Etihad — has halted incoming flights. Qatar, meanwhile has kept flying, consistent with its strategy of using the pandemic to gain market share, particularly from larger arch-rival Emirates.

“It will frustrate their recoveries for sure, especially as these markets have a large proportion of local traffic and therefore were not requiring complex connecting travel requirements,’’ Grant said.