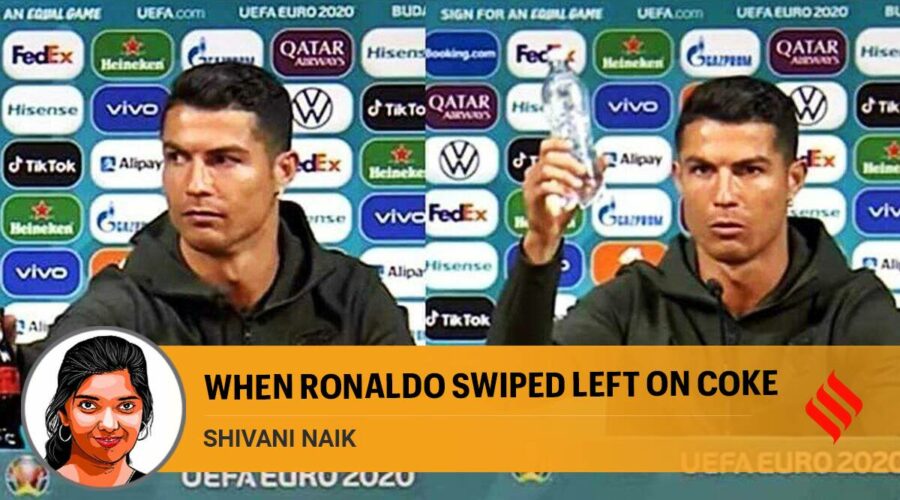 Shivani Naik writes: Only, that football’s biggest names might finally have woken up to the fact that they wield super-human powers of anti-advertising that might be difficult to argue against on the health compass. PLAIN WATER, or ‘Agua’, had its unexpected Cinderella’s palace ball moment last week. The Prince who strutted into the room and swiped left on two ‘look-at-me’ red bottles of Coca Cola was football superstar Cristiano Ronaldo. With 5 Ballon d’Ors to his name in an era where he has gone head-to-head with God’s finest creation trundling on a football field, Lionel Messi, Ronaldo has hardly leant on princely charm to gather his faithful. Clever and cunning suit him fine.

But fresh off 106 goals for Portugal — most for any European, and wearing an added level of irritation to his otherwise menacing demeanour, he literally swept aside the two sponsor bottles from the press conference dias. Sporting rebellion is thick in the European air, with first Naomi Osaka and now a clutch of football players refusing to run with the regulation script. Italian Manuel Locatelli repeated Ronaldo’s snub to celebrate his brace, and then Frenchman Pogba did a hand-of-Paul version of a pile-driver on a bottle of Heineken. Football bosses would do well to ask their men-of-matches about their beverages of non-preference, for this rash of significant self-assertion isn’t about to go away soon.

That governing body UEFA has read out a ‘thou will not meddle with bottles’ scroll to chastise its superstars, means something fizzy went flat at a corporate HQ somewhere. And like a veil lifting over the bleeding obvious, footballers obsessed with fitness are putting their foot down on a product riding on their performance.

It has taken a while coming. What tobacco was to lung cancer in the 1950s sportscape, sugar and fizzy drinks are to diabetes now. Sure, Ronaldo posed with a highly unsuitable bottle of Coke circa early 2000s. But a father of four now, having spoken earlier about how he bars his son from sipping colas, he isn’t willing to put up with being seen with a beverage he frowns upon.

The dissonance was always deceitful: athletes who micro-manage even the shape of their sinews to guarantee peak performance, grinning ridiculously fake smiles while posing with assorted eatables and beverages that are so blatantly unhealthy. At 36, pushing levels of longevity, with what demands unbelievable nutritional discipline, it was always disingenuous to peddle sugar-flavoured all sorts of consumables.

But Ronaldo would know that when he declares war on Cola by merely taking it off camera while the camera rolls, he is hitting at the munching and guzzling couch-sprawled habits of his core constituency: the fans. There will be consequences; expect an army of lawyers to wave contracts at sports bodies. Only, that football’s biggest names might finally have woken up to the fact that they wield super-human powers of anti-advertising that might be difficult to argue against on the health compass.

Big Tobacco showered money on sport, even convinced American baseball legends to say cigarettes could help keep everyone “slender”, hiding that it damaged lungs. But even as tobacco (starting 1870s) was being driven out of baseball, football and even Australian cricket where it peeped slantways into trophy frames, sport proved that other moneybags could swoop in its stead. Alcohol ads too were forced into a corner of marketing soda and bottled water, and fast food — McD and Olympics — is bracing to face its reckoning sooner than later.

News of Coke’s stock dipping soon after Ronaldo’s left swipe wasn’t strictly causal. Smokers haven’t stopped puffing because they couldn’t spot the rolled title sponsor of a cricket World Cup. So it’ll be impractical to think Ronaldo’s snub will show real-life debilitating results. But sports bodies will be quaking in fear now that the game’s canniest poacher has cast his gaze on their product placements. The centre forward is in fine form and will show up oftener than they like at PCs and unlike the gentle AA of yore, this one promises to wean teens off, via a showdown of Coca Cola Cacaphonous.