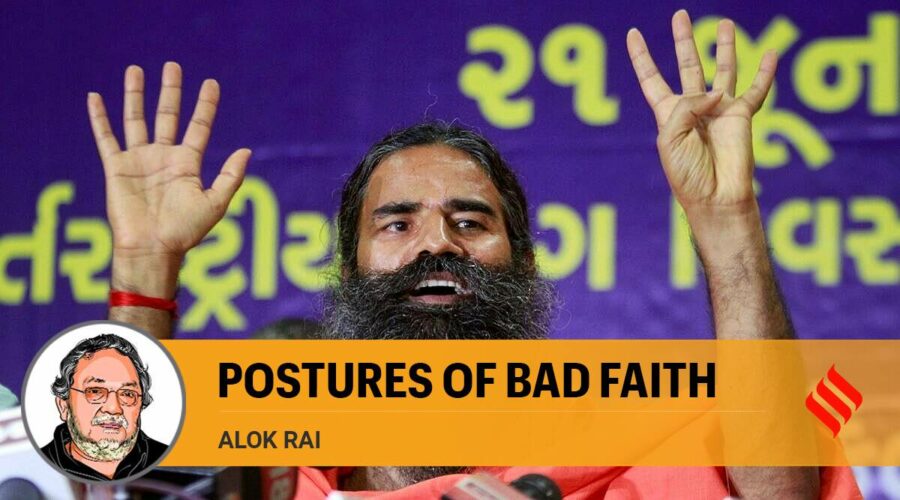 Alok Rai writes: It is a signal to the Hindu savarna constituency that the dispensation is suitably equipped to defend an indefensible social order. 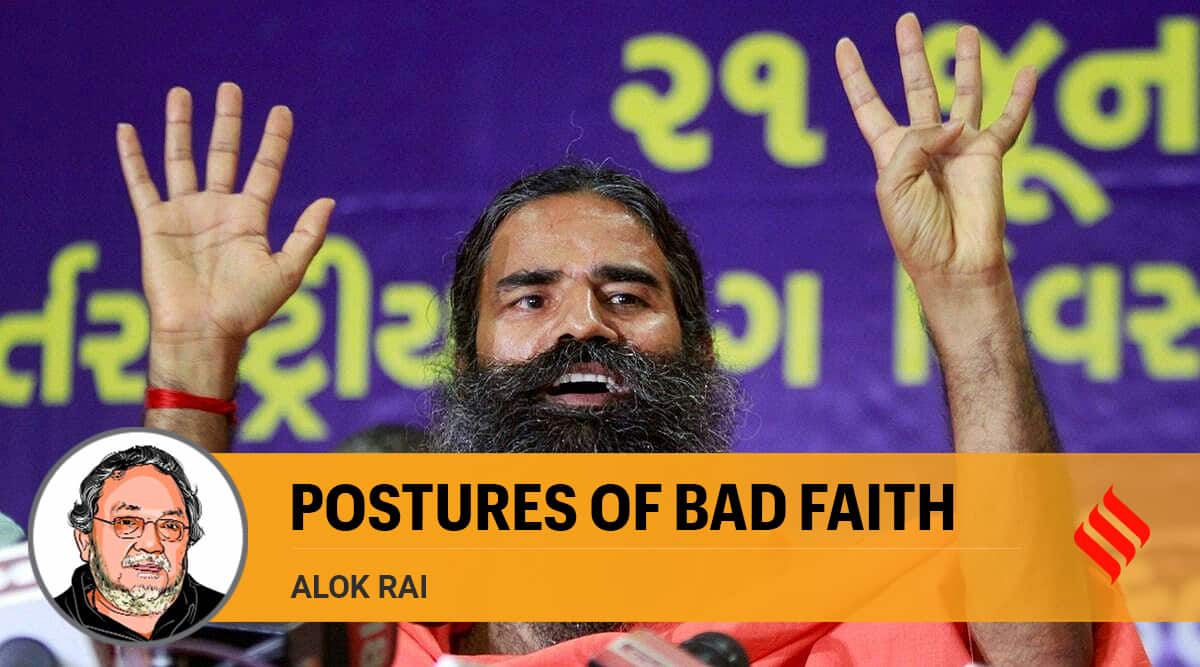 The latest instalment of “stupidity” from Ramdev has got the good doctors exercised: They have hit him with a defamation suit for Rs 1,000 crore. However, this recurrent outrage has brought to the fore once again a question that has exercised many of us over the past seven years. What are we to make of these state-endorsed airings, with ministers in attendance — of Ramdev, and sundry other saffron-swathed frauds? Bovine excreta are, I suggest, a cop-out in this serious context — they are too easily mocked. Is there something devious going on in the way that They periodically retrieve precious nuggets of stupidity from a mythical “ancient India”, as a counterpoint to the vaunted achievements of modern science, of modern Western medicine? Modi’s surgically-rendered Ganesh is only one example.

To be fair, there is a long history of suspicion of modern “Western” medicine in this country, one that is braided into anti-colonial ideology. Gandhi’s prohibitions against vaccination are well-known. Subaltern resistance to modern medicine, which was administered under colonial aegis in the context of various epidemics, is well-attested. So, in a sense, Ramdev is merely an exponent of a venerable tradition of superstition and unreason. The fact that this tendency crystallises in a context of anti-colonial resistance confers an undeserved legitimacy to it. And the real traditions of medical knowledge — Ayurveda and other traditional knowledge systems, eminently empirical, based on observation and practice, get smudged together with the defensive superstitions which a long-neglected people have had to resort to — then, and now. Basically, bogus “tradition” gives authentic tradition a bad name. Aryabhatta’s heirs bang thalis to appease the Virus God.

Ignorance is a large part of the explanation. Pseudo-Sanskrit, pseudo-“tradition”, small helpings of tatsama “Sanskritic” vocabulary, have long served as guarantees of authenticity and wisdom for the semi-literate. One may recall the poor villager proffering his meagre savings to the panditji who represents “tradition” in Premchand’s bitter story, ‘Sadgati’. But is there more to these periodic episodes? Are we dealing with common or garden stupidity here? After all, the general crisis of mere competence in the upper echelons of the present dispensation is too stark not to be noticed. Or is the formidable aggregation of stupidity serving some deeper design?

This possible “deeper design” is normally understood in relation to the supposed beliefs of the vast unlettered mass of the people: Give the people what they want. My own sense of my people is that they are far more canny, and certainly heterogeneous, than is generally realised. The deliberate dismantling of the public health system may well drive them into the arms of quacks, but they know a doctor when they see one. No, this baba-baazi — Ramdev, Sri Sri, J Vasudev — may lull the simple-minded into superstition, but its darker purpose is to provide a kind of reassurance to the savarna-Hindu middle class.

At the most superficial level, it feeds their cultural vanity, impregnable precisely because it is based on a profound ignorance about that “ancient India” which is the foundation of their loud and hollow garv. This mythical world — populated with wise rishis and lascivious apsaras — is the repository of all things good. Further, and crucially, it provides the context for introducing the traumatic rupture and infinite abyss of the “Muslim” middle ages — across which, and only now coming into our own, are wonderful Us. This is nonsense, of course; but it is also very functional. This supposedly “dark” period is also, incidentally, Richard Eaton’s “Persianate age”, seed-bed of much of what we value as our great culture. Time and again, over the last seven years, I have returned to the question of whether these people are really evil, or are they merely stupid — or, indeed, some variable hybrid? The sheer outrageousness of badmouthing heroic doctors and nurses in the context of the pandemic tips the ratio in favour of “stupidity”. But the very next week, there’s the Lakshadweep manoeuvre, and suddenly “evil” seems preponderant.

But the most important part of the cultural agenda that is served by this stuff is the cynical subversion of reason, in favour of an appeal to magic and superstition. This is ignorance, but ignorance weaponised. The legitimacy of the savarna-Hindu social order has been eroded by centuries of cultural critique. The damage that the Bhakti “movement” wrought was reinforced and consolidated by the colonially-enabled forces of modernity — the values of equality, individuality, rationality. The rearguard defence of the Hindu savarna castes, thus divested of legitimacy, leads them perforce in the direction of unreason — even as they cling to the baubles that modernity and science bring. This produces a permanent condition of bad faith, which has been identified by psychologists as the tolerance for cognitive dissonance — nuclear scientists appeasing the fire gods, that sort of thing. The flipside of this ability to harbour contradictory, incompatible beliefs, is a deep amorality, which is the necessary response of the beneficiaries of a flagrantly unjust social order.

There are complicated accounts of what constitutes “bad faith”. But the essence of bad faith is that it involves doing something that one knows to be wrong. Thus, it is contrasted with “good faith” — the innocent error, the honest mistake. And perhaps the key to our present Indian condition is to ask the unanswerable, unaskable question — what are the long-term consequences of living and acting in bad faith? Astute commentators have alerted us to the alarming possibility — reality? — of a condition beyond bad faith. In that hitherto unnamed condition, the consciousness of wrong is itself atrophied — and anyone who seeks to restore that atrophied faculty only causes pain and resentment — rather like the physiotherapist who has to “work” the patient, even painfully, during the rehabilitation process. By endorsing the absurd claims of Ramdev etc, the present dispensation merely signals to its core Hindu-savarna constituency that it is suitably equipped with the necessary cynicism required to defend an indefensible social order.

This column first appeared in the print edition on June 3, 2021, under the title ‘Postures of bad faith’. The writer taught in the department of English, Delhi University

06/03/2021 India Comments Off on What does the government’s endorsement of Baba Ramdev mean?
India