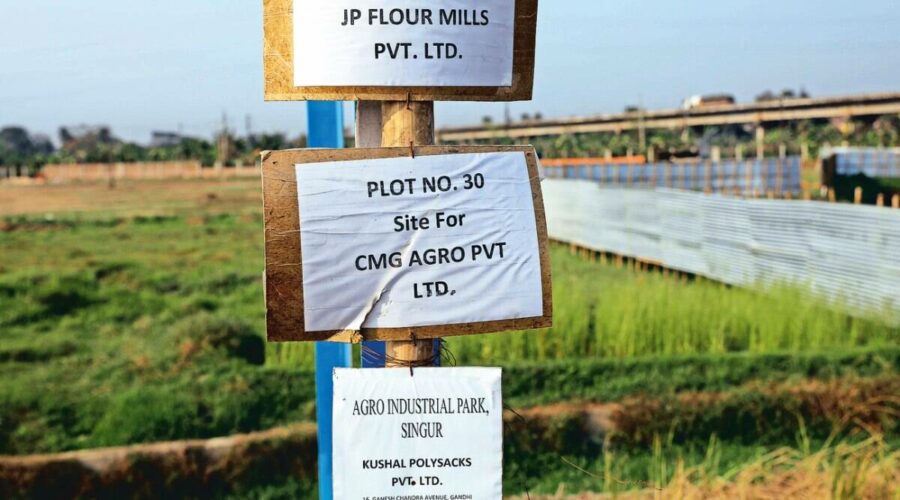 As Mamata seeks a third term in power, at the site of the 2006-08 agitation, time stands still, with a large part of the land still unusable and a small amount of dole still the govt relief. This has created the ground for a new demand: industry Amidst a 997.11 acres plot overrun by wild grass, and strewn with concrete chunks, pieces of iron beams and stones, lie small patches of greenery where farmers are busy picking potatoes. Only a dilapidated wall beside National Highway 2 reminds one of what this land was meant to be: the site of Tata’s Nano car factory.

The movement against acquisition of this land in Singur, and in Nandigram, had propelled Mamata Banerjee to power in 2011. The Supreme Court verdict of August 31, 2016, returning the Singur land to farmers is part of school textbooks in Bengal.

Singur, though, hasn’t turned the page. The 3,000-plus farmers and sharecroppers affected by the land acquisition continue to get Rs 2,000 per month and 16 kg rice from the Mamata government. Meanwhile, a large part of the returned land remains abandoned — the effort too much for farmers caught in the middle of the tussle.

Plus, there is a new battle in town, as Singur votes on April 10. Trinamool sitting MLA Rabindranath Bhattacharya, 89, has shifted to the BJP after the party denied him a ticket as part of a decision to keep out 80-plus leaders. The Trinamool Singur candidate is Becharam Manna, 52, with his wife Karabi standing from his old seat, the neighbouring Haripal. Both Bhattacharya and Manna had been part of the Trinamool’s Singur agitation. 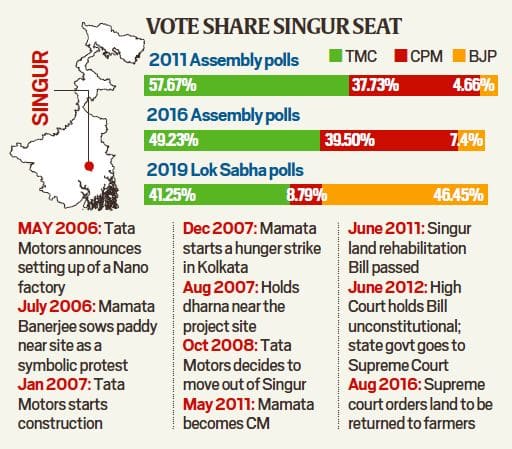 The talk in Beraberi, Khaserbheri, Gopalnagar, Joy Mollah and other villages is as much about the land as the Bhattacharya-Manna divide. And if the Trinamool message is again about land and farmers, the BJP is promising it will get industry to Singur — with some resonance.

As he walks beside the former factory area, Ajit Hambhir, 46, a resident of Beraberi, lays out why the authorities “should get industry back”. “I have 10 cottahs of land here, full of concrete chunks and stones and pieces of iron. My four brothers and I earn a living from land we own nearby.”

Haradhan Bag, 65, says he had to spend Rs 35,000 to prepare his 2.5 bighas for farming even after the state government had cleaned the land. “My two sons are carpenters now. For so many years we could not do farming, that got into their head.”

Udayan Das, a doctor who owns a nursing home near Ratanpur crossing, says, “No political party can give us any hope for Singur.” Talking about his 13 acres of land, Das says it held a cold storage unit and small fishery units, apart from an enclosure for goats. These were partly dismantled during the factory construction, and then given for police accommodation. “After years of knocking on doors, I got back the land. I submitted a plan to the government for poultry, fishing and plantation. Nothing happened. Now I am knocking doors for a submersible pump.”

Asit Kumar Barui (60) of Baruipara was among those who gave up his land voluntarily for the Nano factory. “What happened? Nothing. The factory was dismantled. Did all the farmers get their land back? No. Only 30% have got back to farming. We were not that lucky… One of our youths got training from the Tatas in Pune. It was useless,” Barui says.
Disheartened by the polls, he adds, “It is a mess.”

Bikas Das, 34, among the few lucky ones to be back farming, is as disillusioned with politics. He harvested 100 kg of potatoes from his 2 bigha land that he started tilling last monsoon. “Before the Nano plant issue, I used to get 80 kg,” says the father of two.

While happy about the government restoring his land, he says “politics” is not for people like him. “On one hand there are those who agitated for land and later joined the Trinamool. On the other hand, they squabble over an MLA ticket.”
The Singur Assembly seat has been with the Trinamool since 2001, with Bhattacharya winning consecutively. Over the years, Singur has seen a new college, a trauma care centre, a kisan mandi and concrete roads come up. Recently, construction began for an agro park.

However, the BJP has been creeping up. In the 2019 Lok Sabha polls, it had a lead of 10,000 votes over the Trinamool in this Assembly segment, with the BJP’s Locket Chatterjee winning the Hooghly Lok Sabha seat.

Joydeb Bag, who owns 2.5 bighas in the former Nano plant area, says they are firmly behind the Trinamool. “During the agitation, we all got beaten up. Every year on July 21, I go to Kolkata for the Martyrs’ Rally. The Trinamool will win from here,” says Joydeb.

Just beside the former Nano plant area is the residence of the late Tapasi Malik, 17, whose charred body had been found at the project site in December 2006, leading to a 25-day hunger strike by Mamata. Sitting in his two-storey concrete house, Tapasi’s father Monoranjan Malik says, “Mamata Banerjee is in my heart. She gave jobs to my two sons and gave me a shop on government land.”

However, he adds, “I cannot say the same things for her leaders here. In the initial years, at almost all public meetings they would put me on the stage, ask me to speak. Then they stopped calling me. Now I only have pictures of Mamata Banerjee and myself. Everyone forgot us.”

Manna, however, is confident that the memories remain strong enough to see him through. “People of Singur are with Mamata Banerjee. They know I am available 24/7 for them. I meet 300 people daily.”

The Trinamool candidate also insists farming is back in the Nano plant area, even as he points out that out of the 278 booths, only 14 have people affected by the factory row.

Asked about his wife getting a ticket, Manna says she has been a long-time Trinamool worker.

About 3 km away, in Shibrambati village, Bhattacharya asks how age can be a criterion for denying him the Trinamool ticket. “If 80 years is the cut-off, I passed it nine years back. Why was it not a factor in the last Assembly polls? I am shocked to see that a
husband and wife (Manna and his wife) are given such priority. No one else was suitable in Singur?”

The Bharatiya Janata Mazdoor Trade Union is also planning to put up a candidate, says Mansha Charan Maity, its Hooghly district secretary, with its agenda same as the BJP’s. “We will bring back industry,” Maity says. “Now people of Singur want industry.”