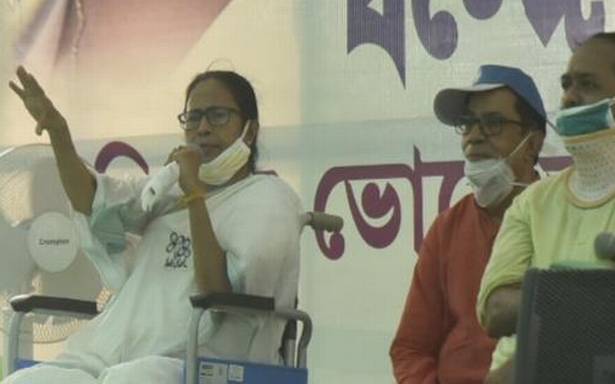 The high-decibel campaigning for the prestigious Nandigram seat in West Bengal drew to a close on Tuesday with road shows and rallies by both Home Minister Amit Shah and Chief Minister Mamata Banerjee but the constituency remained on edge with the BJP and the TMC trading charges of several malpractices.

Pulling out all the stops, Mr. Shah participated in a road show from Bheturia to Reya Para for party candidate Suvendu Adhikari. Hundreds of supporters, including women dressed in saffron saris with the lotus motif gifted by the BJP, gathered in large numbers in the scorching heat. Mr. Shah greeted them from an open vehicle with Mr. Adhikari by his side speaking into a mike and raising slogans rhyming “Nandigram with Jai Shri Ram”. Later, Mr. Shah held a meeting with the supporters in Nandigram.

“The overwhelming response at the road show clearly tells us that Suvendu Adhikari will win with a majority. One of the easy ways to bring change [parivartan] is to defeat Mamata Banerjee in Nandigram,” Mr. Shah said. Actor Mithun Chakraborty , who recently joined the BJP, also campaigned for Mr. Adhikari.

Chief Minister Mamata Banerjee held three public meetings at Sonachura, Basuli Lock gate and Tengua More. “Today is the last day of campaigning here, and I will stay in Nandigram till April 1, the day of the polling. I will leave only after votes have been polled,” she said at Basuli Lock gate. She urged people not to be afraid and come out and vote in large numbers for the “Bhoomi Kanya” [daughter of the soil]. Most of her speech was targeted at Mr. Adhikari, who she called a ‘traitor’. “I gave him everything — from respectful positions in the party to a ministerial berth,” she said, drawing cheers from the crowd.

At two places including at Tengua More, BJP supporters raised “Jai Shri Ram” slogans but Ms. Banerjee did not respond to them. She told journalists that the “BJP is afraid they have lost the match.” Since the campaigning is over, all outsiders should leave the constituency, she said. In the evening, she visited the house of a party supporter at Balarampur, alleging that the BJP supporters had driven her party members out of the villages. “One of the persons has been admitted to a trauma care centre in a hospital. The BJP workers are not allowing the villagers to return home. The Election Commission must provide them security,” she said.

As dusk descended, the situation turned volatile with the BJP supporters alleging that they were attacked by the TMC activists in some areas. The Central armed police forces — 22 companies are stationed in Nandigram — had to stage a march in some areas to bring the situation under control.

Amidst frantic campaigning, the BJP leadership and Mr. Shah alleged that the wife of a BJP supporter was raped in Nandigram.

“Within 5 km of where the Chief Minister is staying, a woman has been raped. When the Chief Minister is in Nandigram and a woman is raped, the incident speaks volumes about the security of women in the State,” the Home Minister said. The husband of the victim said his wife was found unconscious in a waterbody with her hands and feet tied and claimed that the reason she was targeted was because he was associated with the BJP.

At one of her rallies, the Chief Minister said the BJP planned to incite a riot by killing their own party supporters.