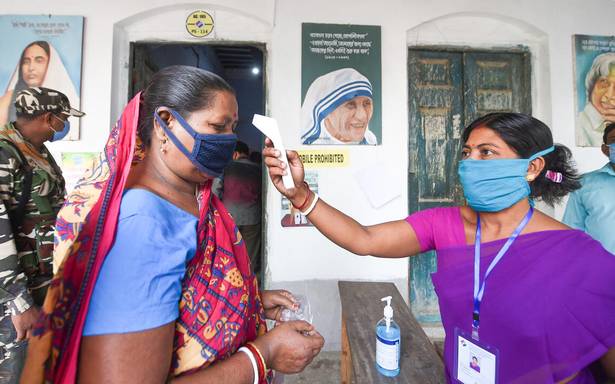 Allegations of voters being threatened and overnight violence, in which a woman was killed, came to the fore as voting began in 31 Assembly segments in the third phase of polling in West Bengal on Tuesday.

In Goghat Assembly segment in Hooghly, a woman was killed. Madahabi Adak was injured trying to save his son late on Monday. The son of the deceased, who identified himself as a BJP supporter, blamed Trinamool Congress (TMC) supporters for the attack.

At least one person was injured when crude bombs were hurled at Canning Purba Assembly segment. Saukat Mollah, the TMC candidate, blamed supporters of the Indian Secular Front for the attack and blocked the road leading to the polling booth.

Several allegations were made by voters in Bishnupur area of South 24 Parganas and Baghnan in Howrah. Villagers said that they were threatened late on Monday against going to polling booths. They alleged that TMC supporters were behind them.

In a video shot at Bishnupur Assembly segment and shared by the Communist Party of India (Marxist) with the Election Commission, a woman is seen arguing with a man who is threatening her with her dire consequences if she went to the polling booth to cast her vote. The woman, however, is seen not yielding to pressure.

The ECI has sought a report from local authorities on the issue and the man accused of threatening the woman voter was arrested. At Falta in South 24 Parganas, TMC supporters attacked the vehicle of a BJP candidate.

About 618 companies of Central forces have been deployed in three districts of Howrah, Hooghly and South 24 Parganas.

“The blatant misuse of Central forces continues unabated. Despite us repeatedly raising this issue, @ECISVEEP continues to be a mute spectator while men in uniform are being misused at several places to openly intimidate TMC voters & influence many to vote in favour of one party,” Ms. Banerjee said on social media, sharing a video of an incident in Uluberia in Howrah in which Central forces personnel and locals could be seen arguing.