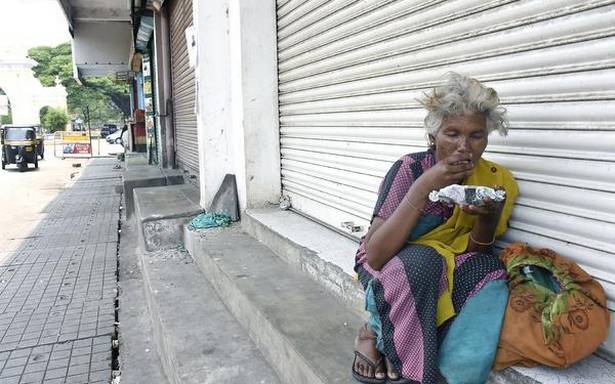 People stepped out for essentials between 6 a.m. and 10 a.m. when there was a relaxation of norms

The second day of the weekend curfew in Mysuru and surrounding regions was total on Sunday underlining the growing realization among the public of the gravity of the second wave of the pandemic.

Though the police was present to ensure that people stayed indoors during the curfew hours, their numbers were conspicuously less and people voluntarily stayed indoors.

Only pharmaceutical shops were open throughout the day and this was the scenario even in residential areas. This is unlike during political bandhs and curfews wherein the impact is only in the heart of the city and business establishments tend to ignore the call to shut down operations in residential areas.

All the main arterial roads as also the major business hubs of the city remained shut. KSRTC ran skeletal services but there were hardly any takers. Though autorickshaws were found stationed in their respective stands to cater to any emergency, a majority did not find any passengers. But there was a semblance of activity between 6 a.m. and 10 a.m. when the curfew hours were relaxed to enable the public to procure grocery or other essential items.

The Railways operated intra and inter-State trains as per schedule but the number of outbound and inbound passengers were in double digits. As the publicity for the weekend curfew was given in advance, people had desisted from travelling in their own interest as evident in the small number of passengers.

The surge in the number of COVID-19 cases was also a contributing factor for people taking precautionary measures and avoiding travelling. This was evident in the pharmaceutical shops where there were hardly any customers without their masks on. This is a far cry from the scenario till two weeks ago when COVID-19 appropriate behaviour was thrown to the wind.

The scenario was similar in major towns like Nanjangud, T. Narsipur, Hunsur, Periyapatana, K.R. Nagar and even in the rural hinterland. In Kodagu, the recent spike in number of positive cases in the last few days has created concern and this resulted in people complying with the curfew norms in full. People in Chamarajanagar and Mandya too remained indoors.