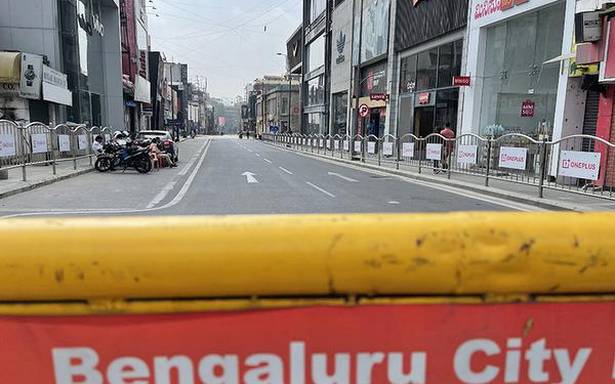 Large parts of the city, that would otherwise be bustling with activity on the weekend, were deserted on Saturday after the curfew kicked in on Friday night.

Retail stores and businesses in most of the market and transport hubs – Majestic, K.R. Market, Old Pete Area, Malleswaram – remained closed. Malls and parks, too, were closed as people were urged to adhere to the restrictions in an effort to stem the spread of COVID-19.

The police had barricaded most arterial roads and stopped motorists without valid reasons for travelling. Cases were booked and vehicles were seized when motorists did not have a valid reason for violating restrictions. Only those who were able to produce documents to back their claims were permitted to travel. Many were seen arguing with the police.

Home Minister Araga Jnanendra with top city police in tow did the rounds of the city on Saturday evening inspecting nakabandis put up to enforce weekend curfew. The Bruhat Bengaluru Mahanagara Palike marshals had also spread out across the city, levying fines on people not wearing masks.

Auto and cab drivers plying the streets complained of police harassment. “The guidelines clearly say we are allowed to ferry passengers to and fro from airport, railway stations. How will people travel if police harass us?” said Manikantha, a cab driver who was stopped by police on Ballari Road. While he claimed he was returning empty after dropping a passenger to the airport, the police had none of it arguing that he could drive his taxi only with a passenger. “In the garb of making trips to the airport, many cabs and autorickshaws are on the street. We need to control them,” said a constable, who did not wish to be named.

However, most residential localities offered a picture in contrast. Shops were open and it was business as usual. Some localities even had their parks open. Most residential pockets saw normal crowds and business during morning and evening peak hours. Though hotels were supposed to be only open for takeaways, darshinis served coffee where people gathered in groups.

City Police Commissioner Kamal Pant said people and businesses had largely cooperated with the enforcement of curfew and Saturday had passed off with neither large crowds gathering nor any untoward incident. He added enforcement of the curfew on Sunday would be similar and will plug some of the gaps observed on Saturday.