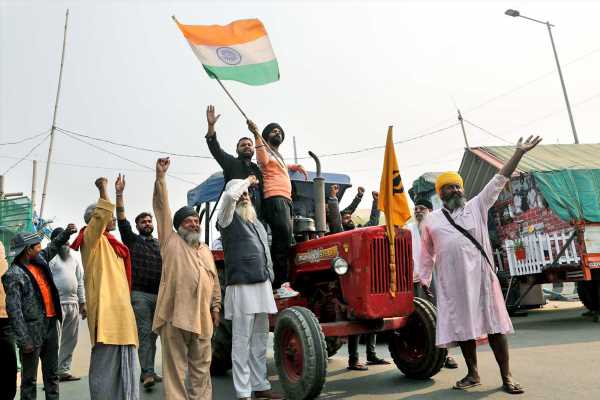 ‘Only then will we withdraw the agitation.’

Even after Prime Minister Narendra Damodardas Modi announced his government’s intent to withdraw the three central farm laws, farmers have refused to withdraw their agitation.

They have now issued six additional demands for the Modi government and stated in clear words that they are not withdrawing their protest unless the government accepts these demands.

Syed Firdaus Ashraf/Rediff.com spoke to Gurnam Singh Chaduni, a leader of the Samyukta Kisan Morcha and Bharatiya Kisan Union to understand why the farmers are adamant despite the government’s climbdown.

“Prime Minister Modi has not said anything about MSP in his speech. Another demand we have is to withdraw cases against farmers which were filed across India during the agitation. In Haryana alone, we have 48,000 cases filed against farmers in one year. All these cases must be withdrawn,” says Chaduni, who was the first farm leader to march with 10,000 tractors against the farm ordinances on July 20, 2020.

Even after Prime Minister Modi repealed the three farm laws, why have the farmers unions come up with six more demands and announced that your agitationwill continue?

These are not new demands, but old ones.

Therefore, we are not withdrawing our agitation.

Don’t you feel negotiations are all about give and take. Modi agreed to repeal the laws, which was your major demand.

MSP (Minimum Support Price) is the biggest matter that bothers the farmers of India.

We are not getting the due MSP for our crops.

If you dig out records of the past 15 years you will find out Rs 45 lakh crore less was paid to farmers by respective governments in terms of the promised MSP.

Moreover, many farmers do not get MSP on many crops.

Today the condition is so bad that we are getting Rs 1,200 MSP for our crop when the MSP declared by the government is Rs 2,000.

Prime Minister Modi has not said anything about MSP in his speech on that day.

Another demand we have is to withdraw cases against farmers which were filed across India during the agitation.

In Haryana state alone, we have 48,000 cases filed against farmers by the M L Khattar government in one year.

All these cases must be withdrawn.

No one is speaking about these issues.

Nearly 700 farmers died in the last one year during the agitation and the government has not uttered a word about giving compensation to any of these dead farmers’ families.

We want the government to compensate the death of these farmers and only then will we withdraw the agitation.

It was in 2017 that the Modi government filed an affidavit in the Supreme Court stating that they will not be able to implement the M S Swaminathan Commission report and they will not be able to pay farmers the C2 cost (at least 50 per cent more than the weighted average cost of production). The government did a U-turn on its election manifesto. So, how can you expect that they will give you in writing about MSP now?

Forget C2 cost and the Swaminathan Commission report the government referred to in the Supreme Court.

You see what the government is giving us now in the name of MSP.

For example, take the cost of production for wheat which was Rs 2,200 per quintal for farmers.

Now if you go by the Swaminathan Commission report, then farmers should have got Rs 3,300 per quintal.

But guess what price farmers got in reality? Rs 1,925 per quintal.

In the open market wheat was selling at Rs 1,600 per quintal.

Just imagine the loss a farmer has to bear on his wheat.

But you are overproducing wheat. Nobody wants wheat, but Punjab farmers are hell bent on producing wheat because they want subsidies.
It is a fact that FCI godowns are full of wheat.
One fails to understand why you all produce wheat when the government does not want your wheat?

Take the example of pulses and maize then.

We are not getting due price for that too.

They imported these crops and here our farmers are unable to sell our produce.

They imported 5 lakh tonnes of maize and when we were selling for Rs 2000 per tonne in our country the price crashed to Rs 1,200 tonnes due to the import policy.

The same is the case with mustard.

Why is the government pursuing such import policies then?

Our government is a signatory to the WTO (World Trade Organization) and due to that Indian farmers will not survive, but American farmers will survive and flourish.

They will dump their produce in India and we will have to take what they are giving, which will result in the end of the Indian farming sector.

Why blame the Modi government then because WTO was signed by the earlier government?

There are ways to counter that.

The government can give relief to Indian farmers or raise taxes (on imports).

There are ways to solve such problems, but the government is not doing it.