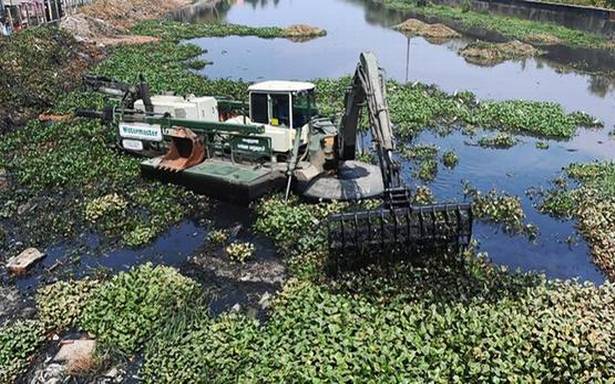 Several floodwater channels and waterways that are ridden with vegetation in the city and its neighbouring districts may soon sport a cleaner look. The Water Resources Department (WRD) will start desilting and clearing floating waste from the waterways in a couple of days.

Of the total ₹11.7 crore sanctioned for various divisions, including Cuddalore, nearly ₹7.8 crore worth of works would be implemented in the city and its neighbouring districts as part of the northeast monsoon preparedness work.

Officials of the WRD said a total of 42 projects would be taken up to clear debris, vegetation and other obstructions to ensure free flow of floodwater and minimise inundation during the coming monsoon.

According to the Government Order issued recently, the WRD has been directed to prevent the dumping of solid waste in waterways and seek the support of other government agencies in this regard. The department has also been asked to chalk out a plan to divert sewage to treatments plants and prevent it from polluting waterways.

Measures would be taken to clear and maintain the river mouths of five estuaries at Ennore, Adyar, Muttukadu, Cooum and Pulicat. Equipment would be deployed at the estuaries to drain out floodwater carried by the rivers. Sand bar formation at the Ennore estuary would be cleared using funds from the Kamarajar Port Trust, officials said.

The breached portions of the flood banks of Araniar river near Minjur and Ponneri would be strengthened. Earth movers on floats would be used in narrow waterways, like Virugambakkam-Arumbakkam Canal and Otteri Nullah. In Buckingham Canal too, float machines would be used for desilting, an official said.

Nearly 180 km of various water channels and surplus courses would be desilted in Tiruvallur district alone. With storage steadily rising in the Red Hills reservoir, residents have demanded that its surplus course be cleared to prevent spillover in surrounding localities.

Officials said the surplus course would also be covered in the project to facilitate unobstructed flow of water in places like Amullaivoyal.

The causeways across Cooum river in areas such as Omshakthi Nagar and Maduravoyal and the Nandambakkam checkdam at Adyar river would also be cleared of vegetation to avoid water stagnation.

A minimum of 50 machines are expected to be engaged in the desilting exercise till the end of the northeast monsoon, the officials added.

09/15/2021 India Comments Off on Waterways in Chennai, surrounding districts to be cleaned, desilted
India