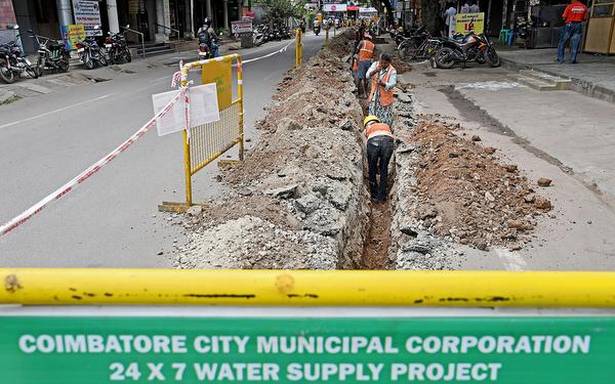 In the next few months or until election, the 24×7 drinking water supply augmentation project is likely to proceed at a slow pace.

Sources involved with the project execution said the Coimbatore Corporation authorities had asked the company executing the project, Suez Projects Pvt. Ltd., to go slow so that it did not have to dig roads ahead of election.

The company is executing the ₹ 2,972.16 crore project to revamp the water distribution network and take care of maintenance of the revamped distribution lines for 21 years in the old city area of 60 wards.

The sources said the logic offered for going slow and not digging roads was to not inconvenience the public, which could perhaps show the anger of having to drive on bad roads at polling booth.

The Corporation’s verbal instruction to the company came at a time when it had mobilised labourers after the COVID-19 lockdown to improve the pace of execution, the sources said.

As of February 2020, when the company is in the second year of the four-year execution period, it had completed only 10% work. Even in R.S. Puram, where the company had first started the work over two years ago, it was left with at least a couple of hundred house service connections.

It had completed laying the main distribution line work in SIHS Colony, Singanallur, Ukkadam, Telugupalayam and a couple of other areas. Or in other words, it had completed most of the work in around 10 of the 100 district metering areas in the 60 wards.

The Corporation and the company had divided the 60 wards in to district metering zones as a part of its execution plan.

The sources also said that when the company accelerates the pace of work after election in May, it would have a window period of a month or two before the South West Monsoon sets in and thereafter the North East Monsoon.

This invariably meant that the company would not be in a position to complete work within the stipulated four-year period, they added.