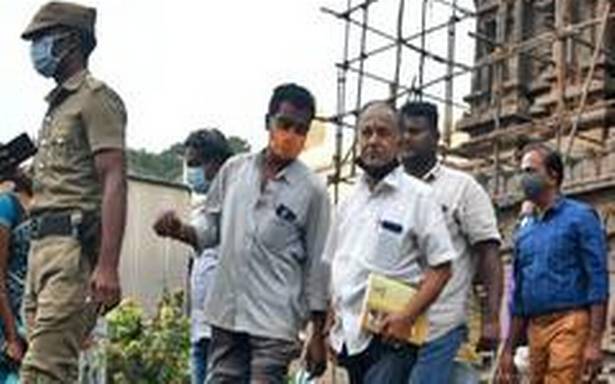 The ASI-protected monument remained waterlogged for a week

The district administration pumped out water from the Jalakanteshwara temple on Thursday. The ASI-protected monument had remained waterlogged for a week.

District Collector P. Kumaravel Pandian inspected the temple after archaeologists and the temple authorities on Monday requested him to take steps to remove inundation in the temple.

“Releasing a portion of water from the moat to the clogged drain can bring some relief as water from the temple can flow to the moat. The PWD and Corporation officials are attending to it,” M. Varadaraj Suresh, Archaeological Officer, ASI (Vellore), told The Hindu.

The temple was flooded for the first time since 1995 mainly because of the moat that reached its full capacity last week.

Officials said the British-era sluice gates on the northern end of the fort have to be repaired to discharge excess water from the moat to the nearby canal, especially during heavy rain.

The existing sluice gates are located at a depth of 15 feet in the moat. The canal was used to discharge excess water from the moat to the Palar river for many decades before encroachments came up along the canal, officials said.