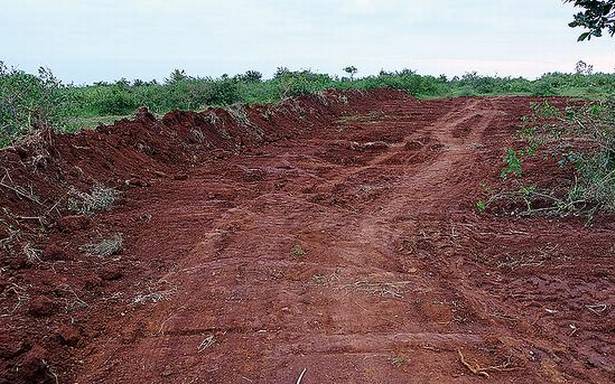 On top of the Damagundam ridge near Vikarabad at an elevation of 700 metres above sea level, the green valley presents stunning views. On the ridge, a farmer has used an earthmover to clear a path for water to flow down the hill to the lake. The farmer lives in Pudur village and the water will fill a lake whose overflow would emerge as a stream and merge with other streams to reach the Himayatsagar reservoir on the outskirts of Hyderabad. Experts now say that it is this fiddling with the water flow that has affected the spread of both Himayatsagar and Osmansagar lakes and the water quality.

“When the twin reservoirs were built there was a clear command by the ruler that additional water-holding structures will not be built. But that rule was broken after National Watershed Development Programme commenced in 1990s,” says B.V. Subba Rao of the Centre for Climate Change at the Engineering Staff College of India.

According to an estimate, there are 70 educational facilities, 35 mineral water bottling plants, and 790 check dams in the catchment areas of Himayatsagar and Osmansagar. “The result is disruption of both surface, sub-surface flow and water table,” says Mr. Rao who believes in the sustainability of water use from the dams for drinking water needs owing to their low carbon footprint.

A number of farm houses have been built by politicians, film stars and celebrities right up to Aziznagar area, sending land prices soaring. These high-walled structures have further disrupted the natural water channels called by the locals orrey (stream), vagu (rivulet), cheruvu (lake), and nadi (river). This has impacted the lakes which now require ever more quantities of rain to fill up.

“Water flows east as well as west from the Damagundam ridge. Owing to high land prices, many buildings are coming up around water bodies like Sarpanpally lake. Other water bodies are also being filled up and have impacted water channels,” says Venkatesh Goteti who lives near Pudur village.

“The Himayatsagar got filled up quickly this year owing to two days of rain in the Shamshabad area. The water channels have been disturbed by unprecedented construction activity,” says D. Narasimha Reddy who works in the field of environment and development. “Even if this water is released into the Musi river it will not be cleaned up. It will only distribute the pollution and will spread downstream at a great velocity,” he says.

The 3.9 tmcft was 1.038 tmcft on October 6 and the stored water is being used for drinking water needs of the city.