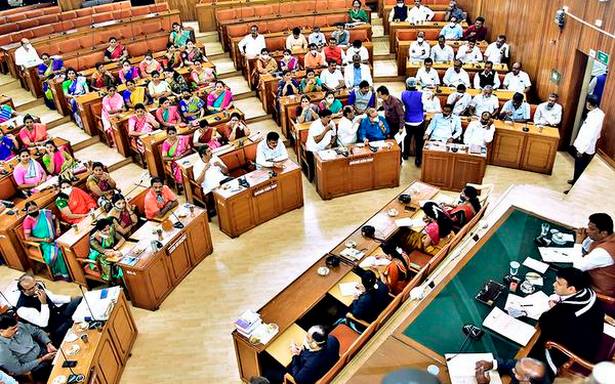 City has been without one since September 10, 2020, when the 5-year term of the BBMP ended

Potholed roads, water-logging, encroachments — Bengaluru’s list of problems has not seen any major changes in the recent past. Yet, the city has been without an elected body since September 10, 2020, when the five-year term of the Bruhat Bengaluru Mahanagara Palike came to an end.

Elections to the local body have been put off owing to a “confusion” on whether the polls have to be conducted for 198 wards or 243 wards, as per the new BBMP Act, 2020.

After the term of the BBMP council ended, when the BJP government showed no signs of holding polls, the matter went to the High Court of Karnataka. Though the court directed the State Government to hold polls within six weeks to 198 wards, the Government appealed against it in the Supreme Court stating that the number of wards had been increased to 243. The case is still being heard in the apex court.

However, sources claim that the Government is now all set to submit an affidavit in the apex court with regard to holding polls for the 243 wards. “In all likelihood, the polls may be held in either April or May 2022,” sources said.

Abdul Wajid, former Congress floor leader in the BBMP council and one of the petitioners before the apex court, underscored the need for an elected body. “With no councillors, the citizens have no one to approach for redressal of their grievances. One cannot expect the MLA to attend to local problems. That is the role of the councillor,” he pointed out, and said that if the elected body were present, the pandemic management in the city could have been better.

He also alleged that BBMP had used the pandemic outbreak as a ruse for not taking up any development work over the past two years. “The projects mentioned in the Budget have not been implemented since 2019,” he said.

Srinivas Alavilli from Janaagraha said that having an elected body in place was at the top of the wish list of many citizens. “It is difficult to imagine that 13 million citizens don’t have a democratic forum to raise issues of the city. Unfortunately, citizens are resorting to social media to air their problems. We can’t go on like this,” he said and added that citizens must participate in local governance, for which an elected body is essential.

Concurring, N.S. Mukunda, founder member Bengaluru Praja Vedike, pointed out that with no elected body in BBMP, issues of the city are in the hands of the state government. “This is against the spirit of the 74th Amendment of the Constitution. Along with the elected body, the ward committees are the checks and balances of a democratic system,” he said and added that only through these could citizens be part of planning and governance.

With polls to the Assembly likely in 2023, the MLAs need foot soldiers. “The MLAs will need councillors. We are hoping at least because of this, the polls to the civic body will be held,” said Mr. Wajid.

For now, all eyes are looking at the Supreme Court, which is likely to pronounce its judgement in the ongoing case early this year.

12/31/2021 India Comments Off on Wanted: An elected body for Bengaluru’s civic agency
India