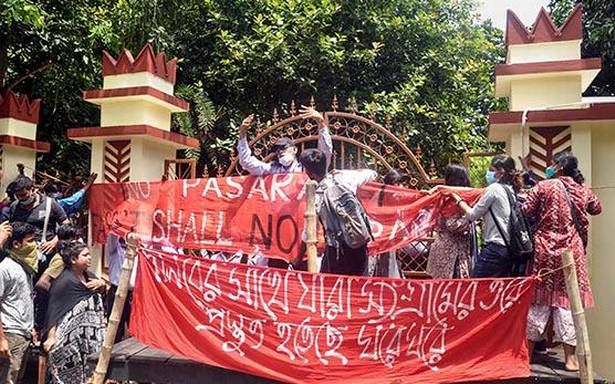 Many blame goof-up on change in composition of body

In what gives ammunition to the detractors of Visva-Bharati Vice-Chancellor Bidyut Chakrabarty and is an embarrassment for the university, the merit list for admission to M.Ed course showed four aspirants scoring far more than the maximum 100 marks.

While the university did not make any comment and its PRO did not answer calls, it withdrew the list from its website, uploaded on September 27, after the errors got noticed and provided fodder to the local media and those employees who are at loggerheads with the V-C.

The list showed as many as four aspirants scoring way above the allotted 100 marks (60 for a written test and 40 for performance in previous exams). One of them was given 200 marks, and three others got 198, 196 and 151 respectively.

Most people, even those who are not aligned with any particular group within the university, blame the goof-up on the recent change in the composition of the Central Administration Coordination Cell, which is responsible for the publication of results. Barely two months ago, a notification was issued that the V-C was “reconstituting” the cell for the “smooth conduct of admission to all courses offered by Visva-Bharati”.

The reconstituted body had the acting librarian of the university as its coordinator.

“For the first time, an employee who is not a professor was given charge of the cell,” said a teacher who has been at Visva-Bharati for 20 years now and who did not want to be named. “In fact, the cell is now packed with people who are not capable.”

Prof. Sudipta Bhattacharyya, the most outspoken critic of the V-C, held the V-C directly responsible for the embarrassment caused to the university. He dug out two circulars from about a month ago — when a section of students was staging a sit-in outside the V-C’s residence — which clearly stated that results and admissions would be delayed because the V-C, “whose presence was necessary” in both processes, was under siege.

“They had clearly stated that the V-C’s physical presence and approval was necessary for the publication of results. And now this has happened. So, who is to be held responsible?” Prof. Bhattacharyya, currently under suspension for his outspokenness, asked.

This year, the university’s position in the NIRF, or the National Institutional Ranking Framework, took the sharpest dip ever since the ranking was instituted in 2015. From the 11th position in 2016 to 19th in 2017 to 31st in 2018 to 37th in 2019 to 50th in 2020, it slipped to the 64th spot in 2021 under the university category. In the overall category, which includes all institutions such as engineering, medical and other colleges, Visva-Bharati ranked 97.