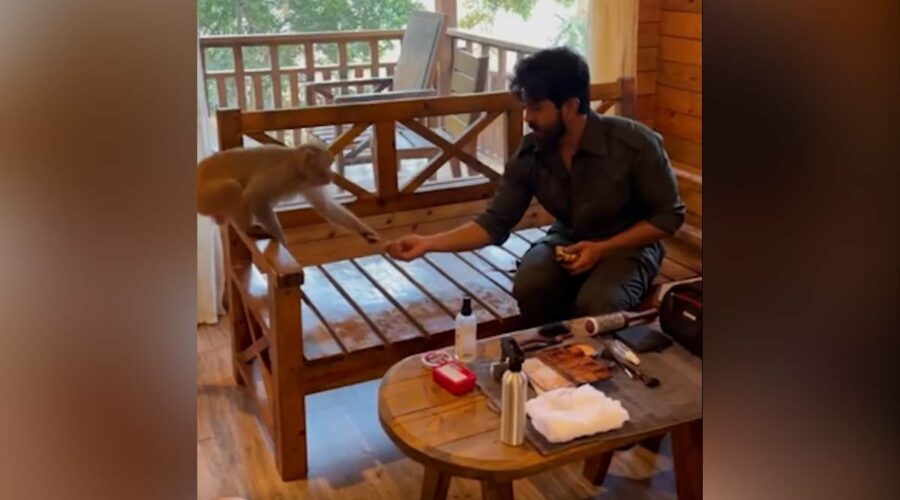 On the  auspicious occasion of Hanuman Jayanthi,  megastar Chiranjeevi  took to his social media and shared an interesting video  that features his loving son Ram Charan. Chiranjeevi is an ardent follower of Lord Hanuman and the same is implied in  this video shared by Sye Raa Narasimha Reddy fame star.

Coming on the video,  Ram Charan is seen in Siddha look. While he is doing his makeup, a monkey enters the room. As Ram Charan noticed the monkey, he fed some biscuits to it with his hands. Sharing the video on social media, Chiranjeevi conveyed Hanuman Jayanti’s wishes as he wrote in Telugu, which is translated, “Happy Hanuman Jayanti to all!#happyhanumanjayanthi.” This video is going viral on the social media and is grabbing the attention of mega fans.

On the work front, both Ram Charan and Chiranjeevi are coming together with an upcoming film Acharya which has Kajal Aggarwal and  Pooja Hegde in the female leads. Few days ago the makers released the trailer . Helmed by Koratala Siva, Devi Sri Prasad is rendering the tune. The social message oriented movie Acharya is produced under the banners Konidela Productions and Matinee Entertainments respectively.

Acharya is slated to hit the theaters on 29th April.