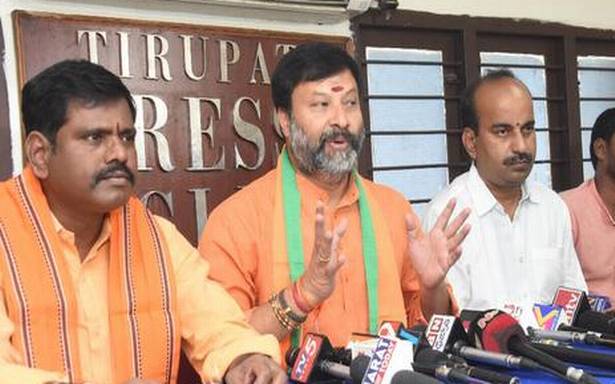 ‘Government should not cross the line of morality’

Several political parties have come down heavily on the State government for “systematic violation” of rules and have also lauded the A.P. High Court’s decision to suspend the order on appointment of special invitees to the TTD trust board.

At a media conference here on Wednesday, BJP State spokesperson G. Bhanuprakash Reddy, who filed the Public Interest Litigation (PIL) petition questioning the appointment of 28 members (vide G.O. Ms. No. 245) and ‘special invitees’ (vide G.O. Rt. No. 568 and 569), called the court verdict a “victory for the crores of devotees of Lord Venkateswara.”

He appealed to the State government to take decisions going by the set norms and not to cross the line of morality.

“The rulers should view the reality that people are not happy with its unilateral decisions. They should assure the devout that they will not behave in an arbitrary manner,” Mr. Reddy observed.

Referring to the alleged criminal background of 28 board members, Mr. Bhanuprakash Reddy said the counsel had also brought to the court’s notice that the members suffered from “moral turpitude,” having been accused in several criminal cases.

“The court has directed our counsel to implead the 28 members as party respondents to the PIL and granted two weeks to file the same,” he added.

Hailing the decision, Congress leader P. Naveen Reddy demanded that the Chief Minister’s Office reveal the names of the “influential persons” who had recommended the names of the 52 special invitees and the eligibility criteria chosen to select them.

He wondered how bureaucrats having vast experience had failed to foresee the possibility of such a “misguided decision” getting struck by the judiciary. The party also urged the government to take decisions in tune with popular beliefs and religious sentiments.

TDP youth wing leader A. Ravi Naidu, in-charge of Tirupati parliamentary constituency, hailed the verdict and hoped that it would augur well in curtailing future deviations. He appealed to the government not to take any decision that could harm the interests of the common man.

09/22/2021 India Comments Off on Verdict on TTD special invitees a victory for the devout: BJP
India